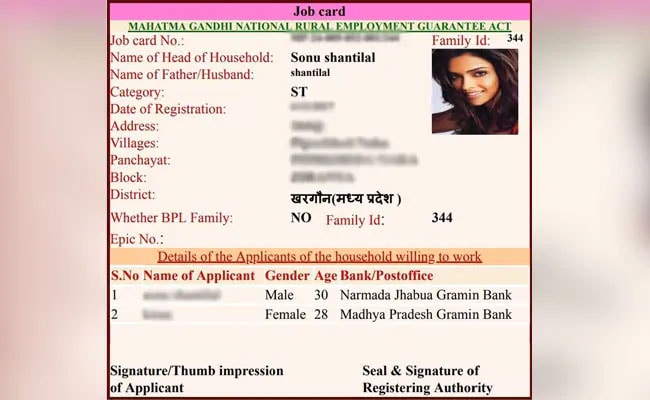 Bollywood star Deepika Padukone works as a migrant labourer in a village in Madhya Pradesh's Khargone district - or so MNREGA job cards carrying her photograph would have you believe.

Fake MNREGA (Mahatma Gandhi National Rural Employment Guarantee Act) cards issued in the name of Sonu Shantilal, Manoj Dubey and nearly a dozen other villagers - but carrying glamorous photographs of Ms Padukone and at least 10 other film stars and celebrities - have been circulating and claiming wages from Peeparkheda Naka village in the Jhirnia panchayat.

District officials believe lakhs of rupees have been claimed on these fake cards as wages for activities that were never undertaken in the first place; for example, according to the cards Sonu Shantilal was paid for building a drain near his village.

Other cards have been paid for digging ponds and repairing canals. A sum of Rs 30,000 has been withdrawn every month against a card in Mr Dubey's name.

However, Mr Shantilal and others whose names are on these fake cards say they have no idea how this happened. According to Mr Shantilal and Mr Dubey, neither has claimed a single day's work. Mr Dubey, in fact, claims 50 acres of farm land and says he never had a MNREGA job card made.

"I don't know how this card was made. They replaced my wife's picture with Deepika," Sonu Shantilal said, alleging that the panchayat secretary and employment assistant were involved in committing this fraud.

The CEO of the district panchayat has ordered an inquiry into how these cards were printed and wages released. Action will be taken against the guilty, he declared.

"Information on 11 job cards with pictures of celebrities has come to my notice. In the last few days large amounts of money have been withdrawn and muster rolls filled. We will find out how the job cards were issued and how these pictures were taken. Action will be taken against whoever is found guilty in the investigation," Gaurav Banal said.

This is the same district panchayat - Jhirnia - that was praised for having paid out 100 per cent of allotted wages for employment under the MNREGA scheme.