The agency has booked Deepak Pandit, his wife Arushi and two sons -- Ashutosh and Divyansh. 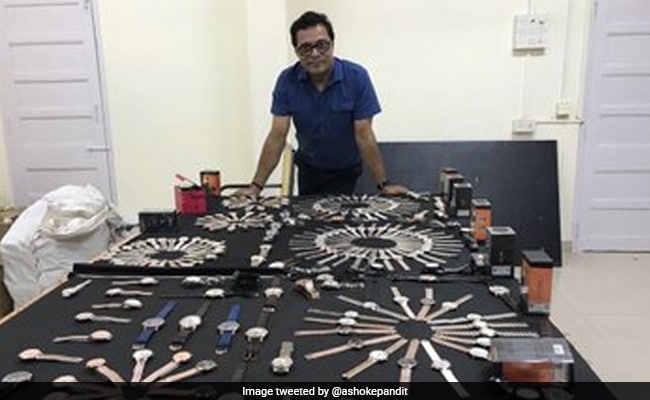 The Central Bureau of Investigation has registered a case against Deepak Pandit, an Assistant Commissioner of Goods and Service Tax and Central Excise, on corruption charges for amassing assets worth over Rs 3.96 crore which are 376 per cent above his known sources of income, officials said on Friday.

Pandit, a close relative of film personality Ashoke Pandit, is alleged to have abused his official position and indulged in corruption for amassing these assets, they said.

In a tweet in 2018, Ashoke Pandit had described him as his "younger brother".

The agency has booked Deepak Pandit, his wife Arushi and two sons -- Ashutosh and Divyansh.

The agency sleuths carried out searches at seven residential premises -- six in Mumbai and one in Bhubaneswar -- in the name of Pandit and his family members on Thursday which continued till late evening, they said.

Pandit started his career with the Customs department as a clerk in 1985 in Mumbai, was promoted as Assistant Commissioner in 2014 and is currently posted in Bhubaneswar, the CBI alleged.

In a 14-year period, January 1, 2000 to March 31, 2014 during his posting in Mumbai, Pandit allegedly accumulated movable and immovable assets in his name and in the names of his family members when the total family income was Rs 1.05 crore.

The agency said the family accumulated assets worth Rs 4.39 crore with expenses of over Rs 61.80 lakh during the period.

The CBI said going by documented income and expenditure, Deepak Pandit has assets worth over Rs 3.96 crore in his name and the names of his family members which are 376 per cent over his known sources of income.

During the searches, the CBI recovered documents pertaining to Rs 1.82 crore worth of fixed deposits, investments in mutual funds, property documents of flats at six up-market localities in Mumbai and one in Bhubaneswar, the officials said, adding that these were part of disproportionate assets mentioned in the FIR.

"The accused, Deepak Pandit, was found in possession of disproportionate assets to the tune of Rs 3.96 crore acquired in his own name and in the names of his wife and two sons," the FIR said.

The agency has alleged that his wife Arushi Pandit did not have any independent source of income but she acquired immovable properties in her name and sold them.

It is alleged that properties were purchased by her for and on behalf of her husband Deepak pandit, it said.

"It is also learnt that Ashutosh Pandit, the elder son of Deepak Pandit, had also acquired immovable properties during the check period in the form of two flats at JVPD Scheme, Vile Parle, Mumbai for Rs two crore, when he was not having any source of income. These properties were acquired by him for and on behalf of his father Deepak Pandit," it alleged.

The CBI has "reliably learnt" that Divyansh Pandit, the younger son of Deepak Pandit, had purchased gold bar bullion for Rs 94.56 lakh when he was not having any source of income, it alleged.

"Thus, it is prima facie established that Deepak Pandit being a public servant abused his official position and committed the offence punishable...under Prevention of Corruption Act, 1988 by amassing assets disproportionate to his known sources of income," it said.