Chandrababu Naidu's protest in the national capital demanding special status for Andhra Pradesh became a rallying point for the opposition. 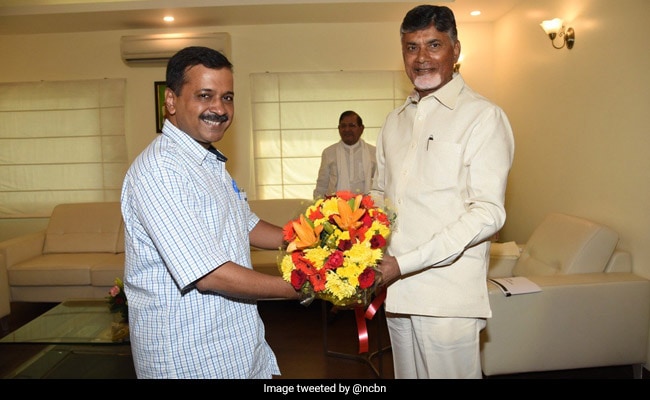 Arvind Kejriwal arrived in Amravati in the evening. (File)

Mr Naidu's protest in the national capital demanding special status for Andhra Pradesh became a rallying point for the opposition, which got together for the second time in less than a month to present a united front against the BJP-led NDA government.

Mr Kejriwal arrived in Amravati in the evening, accompanied by his deputy Manish Sisodia.

State Water Resources Minister DU Rao received the Delhi Chief Minister at the airport and drove him to Mr Naidu's riverfront residence after a stopover at a hotel in Vijayawada.

Both Mr Naidu and Mr Kejriwal were said to have discussed political issues though no formal communique has been issued either by the CMO or the Telugu Desam Party.

After the day-long protest in New Delhi on February 11, the TDP Chief is planning to organise a massive rally here seeking "justice" for Andhra Pradesh.

Mr Naidu wants leaders of 22 parties, who attended the Trinamool Congress rally in Kolkata, to take part in the Amaravati event as well.

The date for the rally has not been fixed but the TDP is considering holding it in the first week of March, party sources said.

The issue might have also been discussed by the two Chief Ministers, they added.