The onward journey of trucks to south Kashmir districts, carrying wooden or card board boxes to pack fruits, have been halted till November 1, leaving truckers to await the opening of the road. 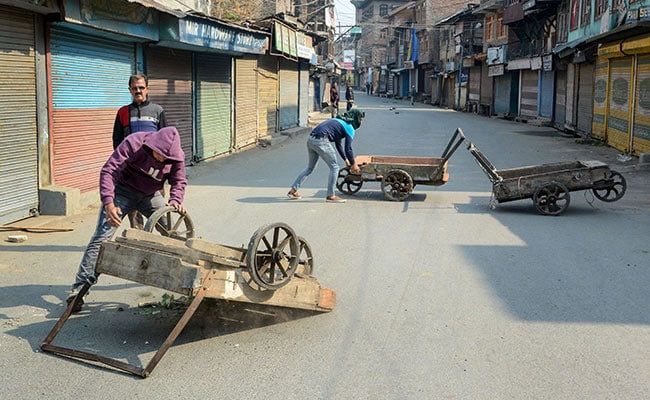 Protesters block a street during a shutdown in Srinagar

Scores of south Kashmir-bound trucks engaged in ferrying apples to other parts of the country have been stopped on Jammu-Srinagar national highway by police in the wake of the killing of Katra-based driver on Monday evening at Kalinwal village in the terror-infested region.

The onward journey of trucks to south Kashmir districts, carrying wooden or card board boxes to pack fruits, have been halted till November 1, leaving truckers to await the opening of the road.

It was not immediately known if the truckers have been stopped as a precautionary measure or to facilitate the durbar movement from the Jammu and Kashmir's summer capital Srinagar to winter capital Jammu, as officials did not pick up calls.

"There was an announcement to halt on the highway here by the police till November 1. We don't know the reason, but we feel it is due to killings of truckers", said Kuldeep, a trucker from Phagwara in Punjab.

Even as truckers waited at Nagrota area near Jammu for opening of roads to Srinagar and beyond, some of them shared near-death experience in south kashmir districts during their earlier trips and appeared least inclined to take up their onward journey out of the mortal fears of encountering death again.

"We are compelled to revisit the terror dens again and again and dare death for the sake of living," rued driver Garjeet Singh from Haryana.

Talking of his earlier near-death experience in a south Kashmir district, Garjeet Singh said, "Three masked terrorists came and assembled us (truckers). They tortured us. But we managed to escape. They opened fire on our trucks. But we escaped."

Showing the tell-tale signs of hale of bullets on his truck's body and broken window panes, he said, "I am completely terrorised to visit the place again."

Some of the truckers blamed police and paramilitary forces for providing them no security and leaving them to their fate in militancy infested area.

Another trucker Suran Singh said they fear for their lives and do not want to visit the area again for ferrying apples.

The police should have taken some security measures for us to avoid casualties of truckers, he added.

Narayan Dutt, a resident of Kakriyal village of Katra, was shot dead by terrorists in south Kashmir's Kanilwan village on Monday evening in the fourth such incident in past three weeks.

Narayan Dutt was the fourth trucker killed by terrorists. An apple trader from Punjab and a labourer from Chhattisgarh were also killed by the terrorists to create fear among the people.

Nearly 6 lakh metric tonnes of fresh fruits have been transported out of Kashmir valley in the past three months, an official spokesman said on Friday.

"Hogwash": Mehbooba Mufti On Lifting Of 2-Day Curfew In Jammu And Kashmir