Davos 2018: PM Narendra Modi will give a speech at the opening session of the World Economic Forum today. 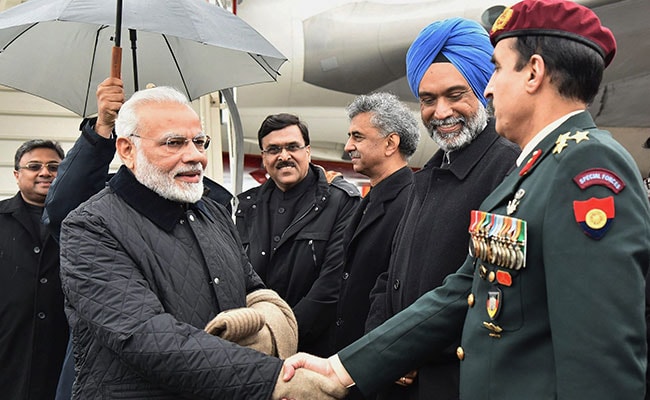 Davos 2018: PM Narendra Modi will give a speech at the opening session of the World Economic Forum

Davos: Prime Minister Narendra Modi is the first Indian prime minister in two decades to attend a meeting of the world's rich and powerful in Davos, trying to carve out a bigger global role for the country, while convincing investors that his economic reforms are a success.

PM Modi will give a speech at the opening session of the World Economic Forum today, where his key message will be that India is open for business and the economy can contribute to world growth as living standards improve at home, said Vijay Gokhale, top diplomat for economic affairs. India's vision is of an open global economy, he said.

PM Modi's debut at the WEF comes a year after Xi Jinping became the first Chinese leader to address the conference, mounting a strong defense of globalisation amid US President Donald Trump's trade threats. With Trump also making an appearance in Davos, PM Modi will have an opportunity to show India's growing clout, while fighting perceptions back home that economic growth is losing steam and he isn't creating enough jobs.

"We have to speak about India's achievements in the past few years and the opportunities that it presents to global business, and that will be the message the prime minister will deliver," said Mr Gokhale.

While the $2 trillion economy is forecast to grow at the slowest pace since 2014 in the year through March 31 following a series of disruptive policy changes, the International Monetary Fund predicts the pace of expansion will revive to almost 8 per cent over the next four years. India is set to overtake Germany as the world's fourth-largest economy in 2022, presenting a huge opportunity for global companies looking to expand.

Indian officials will meet with top executives of companies ranging from Airbus SE to General Motors Co. and JPMorgan Chase & Co. to outline an economic agenda that's focused on removing bureaucratic sloth and reversing the country's image as a hard place to start and do business. Yoga classes and Indian cuisine will be on offer at the Swiss ski resort.

"Narendra Modi has a mammoth set of tasks in front of him," John Studzinski, vice-chairman of investor relations and business development at the Blackstone Group LP, wrote in a column for BloombergQuint. "With his appearance at Davos, he stands both to enhance his reputation as a hands-on national leader and gain new respect as a much-needed global statesman."

India is reliant on foreign investment since it runs twin deficits on its budget and current accounts. The country has seen foreign direct investments worth $195 billion (12.4 lakh crore) since PM Modi came to power, but that's dwarfed by what neighboring China attracts.

PM Modi was rewarded for his reforms with a recent credit rating upgrade and India's jump of 30 places to the 100th spot in the World Bank's latest Ease of Doing Business rankings. But a chaotic roll out of the goods and services tax in July and an unprecedented ban on high-value cash notes in late 2016 has hurt the economy and hit business sentiment.

"Apart from the usual selling points like favorable demographics, a large English-speaking population and huge domestic market, he has the goods and services tax," said Devendra Pant, New Delhi-based chief economist at India Ratings Ltd. "It can be sold as the tax reform under which companies won't have to deal with multiple states or rates."

The government has also undertaken reforms by passing a bankruptcy code and announcing a $33 billion (2.1 lakh crore) recapitalization plan for struggling state-run banks. That's expected to unclog credit delivery channels, boost demand for loans from companies that have been paying down debt and get banks, which are saddled with bad loans, to start lending again.

Promoted
Listen to the latest songs, only on JioSaavn.com
With PM Modi heading into an election year in 2019, businesses are looking for assurances that he will carry on with structural reforms, such as opening up the banking sector to achieve double-digit growth rates.

"He must present himself incontrovertibly as a leader who is not prepared to compromise his laudable, if ambitious, long-term objectives for the sake of short-term gains achieved through identity populism," said Blackstone's Studzinski. "His Davos audience will admire him all the more for adhering to principles that will enhance India's contribution not just to the global economy, but to the world's geopolitical and moral order."
Comments
Davos 2018Prime Minister Narendra ModiWorld Economic Forum 2018