Daughter's Day: In a black saree and a bag slung on her shoulder, Nirmala Sitharaman is seen holding her daughter, Vangmayi Parakala, in the nostalgic photo 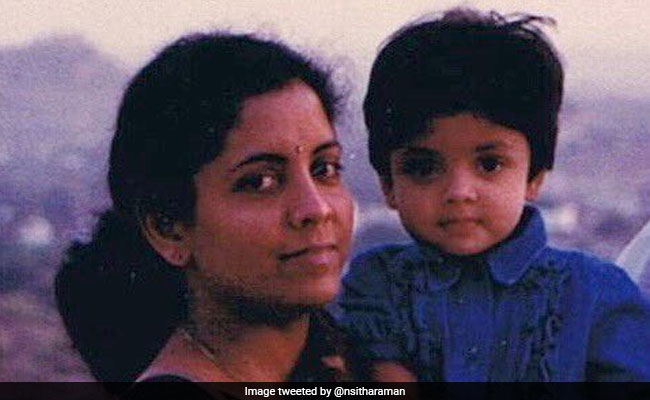 Daughter's Day: Nirmala Sitharaman tweeted an old photo in which she is holding her daughter

Finance Minister Nirmala Sitharaman today tweeted a warm picture of her younger self and her little girl on Daughter's Day, which is being observed across the world in celebration of the girl child.

In a black saree and a bag slung on her shoulder, Ms Sitharaman is seen holding her daughter, Vangmayi Parakala, who is in a blue shirt in the grainy photo that was taken years ago. Hills are seen in the distance in what appears to be sunset in the nostalgic photo taken with an analogue camera of that time.

"Can say so much and more about daughters. A #throwbackpic with my daughter. A friend, philosopher and a guide. Here's this on #DaughtersDay," Ms Sitharaman tweeted.

Can say so much and more about daughters. A #throwbackpic with my daughter. A friend, philosopher and a guide. Here's this on #DaughtersDaypic.twitter.com/640XrUqm2n

Ms Parakala is a features writer at The Hindu.

Congress General Secretary Priyanka Gandhi Vadra also tweeted a photo of her 16-year-old daughter, Miraya Vadra, today. "Who knew there was a '#Daughtersday' I thought it was every day," Priyanka Gandhi tweeted, along with a photo of Miraya Vadra looking towards the sky and smiling with her eyes closed as snowflakes fell on her shoulders on a winter day.

The centre gives top priority to empowerment of the girl child and runs the 'Beti Bachao, Beti Padhao' (educate and save daughters) programme to check rising imbalance in India's sex ratio.

The trend of decline in child sex ratio, defined as the number of girls per 1,000 boys till six years of age, has been unabated since 1961, the government says on the official website of the programme. The decline from 945 in 1991 to 927 in 2001 and further to 918 in 2011 is alarming, it says. "The decline in child sex ratio is a major indicator of women disempowerment," the government says.

"Social construct discriminating against girls on the one hand, easy availability, affordability and subsequent misuse of diagnostic tools on the other hand, have been critical in increasing sex selective elimination of girls leading to low child sex ratio," it says.

Although a national campaign that covers all states and Union Territories, the 'Beti Bachao, Beti Padhao' programme is specifically focused at 100 districts low in child sex ratio.

The programme is a joint initiative of the Women and Child Development, Health, and Human Resource Development ministries.