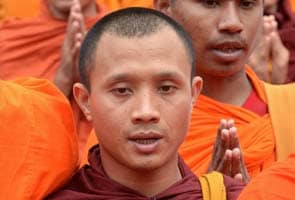 Siliguri: Around 12,000 Buddhist monks and students living in pagodas and monasteries of northern West Bengal's Darjeeling hills face an impending food crisis with the pro-Gorkhaland shutdown continuing for the tenth day on Monday.

Already there is a food shortage in the monasteries and Buddhist educational institutions scattered across the three Darjeeling hill sub-divisions -- Darjeeling, Kalimpong and Kurseong.

The Gorkha Janmukti Morcha (GJM) has announced that it would begin a public curfew (urging the people to remain indoors) from Tuesday.

"The situation is grim. We will face a grave food crisis if normal life continues to be stalled for some more days," said Himalayan Buddhist Cultural Association general secretary Sonam Lundrup Lama.

Between 12,000 to 15,000 Buddhist monks and religious students reside in the monasteries and Buddhist schools situated in places like Ghoom, Dali, Pokhrebung, Sonada, Rimbik, Kurseong, Tindharia, Kalimpong and Labha of the three hill sub-divisions.

"There is some resentment against the shutdown. We are planning to make an appeal to the GJM for supply of food stocks. If need be, we will go to GJM president Bimal Gurung. We are keeping a watch on the situation," said Lama.

The monks live frugally, and do not keep stocks that last long.

"As per our religious practice, the monks and the bhikkhus live off alms and donations collected from disciples, going door to door. Pilgrims to the monasteries and pagodas also offer donations.

"Due to the shutdown, no vehicles are plying. The monks are unable to go to the villages. The pilgrims are also unable to visit the monasteries," Lama said.

Promoted
Listen to the latest songs, only on JioSaavn.com
"We will take a decision at the right time. The situation is such that apart from food, there will also be a shortage of medicines if the disruption continues," he said.

The Gorkha Janmukti Morcha, however, said there would be a 24-hour relaxation on Aug 15 - Independence Day and on August 16, 17 and 18. "But we are not aware of any such food crisis faced by the monasteries," GJM general secretary Roshan Giri said.
Comments
Buddhist monksDarjeeling bandh