Another challenge being hurled by Punjab political leaders at each other is a dare to contest from one seat. 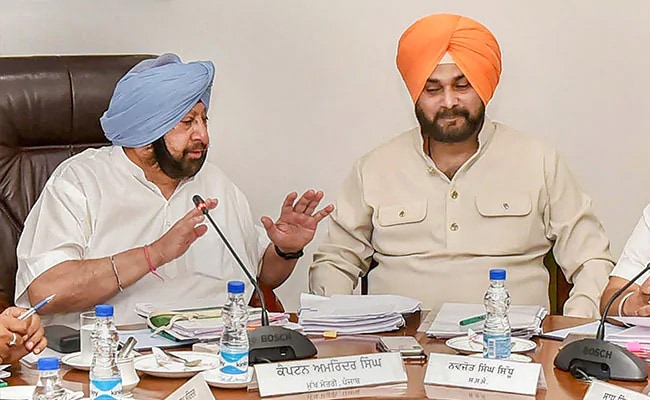 Punjab Congress chief Navjot Singh Sidhu's badminton match challenge to former Chief Minister Amarinder Singh is among the many dares Punjab political leaders are throwing at each other two weeks before the state goes to polls.

Another hot favourite among the challenges thrown being hurled at rivals is a dare to contest from one seat.

This exchange of dares has intensified after the Congress fielded Chief Minister Charanjit Singh Channi from two seats and Shiromani Akali Dal's Bikram Singh Majithia said he would take on Mr Sidhu in Amritsar East.

After the Congress announced that Mr Channi will contest from Bhadaur as well as Chamkaur Sahib, Aam Aadmi Party (AAP) leader Arvind Kejriwal took a swipe: "I had said that according to our survey, Channi is losing from Chamkaur Sahib."

Hitting back, Mr Channi dared the Delhi Chief Minister to contest against him from any constituency in Punjab.

Mr Sidhu, while filing his nomination from Amritsar East seat, threw a challenge to Amarinder Singh to leave Patiala and contest against him. The state Congress president also dared Mr Majithia to fight from only one seat.

"If you have so much guts and have faith in people, then leave Majitha and fight from one seat here. Do you have the guts?" Mr Sidhu dared. Days later, the Akali leader announced his decision to contest only from Amritsar East. His wife Ganieve Kaur is now the party candidate from his stronghold Majithia.

Akali Dal chief Sukhbir Singh Badal has dared the Charanjit Singh Channi government, saying he will quit politics if they bring any proof against his brother-in-law Majithia, who is being investigated in a drugs case.

The war of words on Punjab's political horizon has intensified as polls approach.

Targeting rivals, Mr Sidhu recently said, "These days even in their dreams they are seeing me and getting scared. A pack of jackals wants to hunt a lion."

"Amritsar East is Congress' seat, it is a matter of prestige for us too, Majithia you have challenged us from our turf, you will be given a strong reply," he added.

Mr Majithia, however, has said Mr Sidhu will lose from Amritsar East, accusing him of doing nothing for the people of the constituency.

The state Congress chief described Amarinder Singh as a "spent cartridge". "Amarinder Singh is now talking of double engine government. Your own engine has since long been seized, black smoke is coming out from this engine...You cannot even walk properly," Mr Sidhu said, taking a swipe at the former Chief Minister, who was forced to quit in face of bitter inflighting.

Mr Sidhu also went on to challenge the former Chief Minister to a 30-minute badminton game and said he will quit politics if Mr Singh agrees.

Joining in, Mr Kejriwal has hit out at both Mr Sidhu and Mr Majithia, calling them "political elephants" and saying they were ignoring issues of the people.