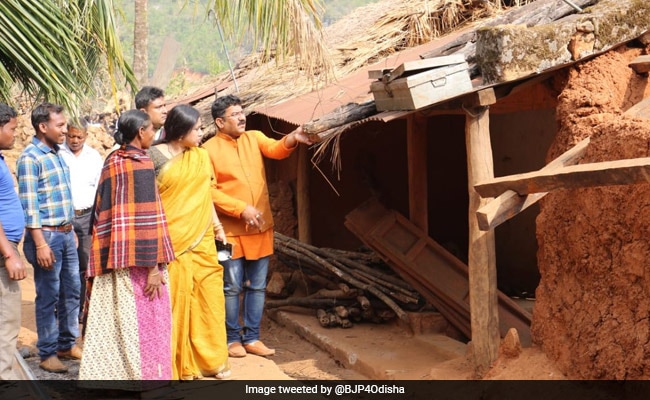 A five-member team of the Odisha-wing of the BJP visted victims of Cyclone Titli.

A five member team of the Odisha-wing of the Bharatiya Janata Party, led by legislator Rabi Naik and Pradeep Purohit, on Tuesday visited areas affected by Cyclone Titli and subsequent flood. They met with the people to assess damages and inspect relief works undertaken by the state government.

"Even after 45 days of the Cyclone Titli, many parts of Chikiti in Ganjam district continue to be disconnected from administration and development, local MLA Usha Devi is a minister in the Naveen Patnaik-led government. She is yet to visit the affected areas," Ms Samantsinghar said.

Roads are damaged, Houses are destroyed, people have no where to go, Life is difficult during winter in hilly terrain. Teary eyed people of Madabaa in Gajapati await the promised help to arrive from the capital Bhubaneswar. pic.twitter.com/ayj4VpUIaY

"The victims of Titli Cyclone have still not received compensation or assistance for reconstruction of their broken houses and schools even after 45 days though state government claims to have paid everything," Ms Samantsinghar added.

Incessant rainfall, consequent floods and severe cyclonic storm Titli that occurred on October 11 and October 12 caused an extensive damage to the houses, standing crops and plantations, thereby adversely affecting the farmers in the state of Odisha. The animal husbandry, fisheries, handloom and sericulture sectors were also affected severely.