The GAL Constructor barge was out of control for three days before the cyclonic storm led to its sinking, Avinash Aadke, a rescued worker said. 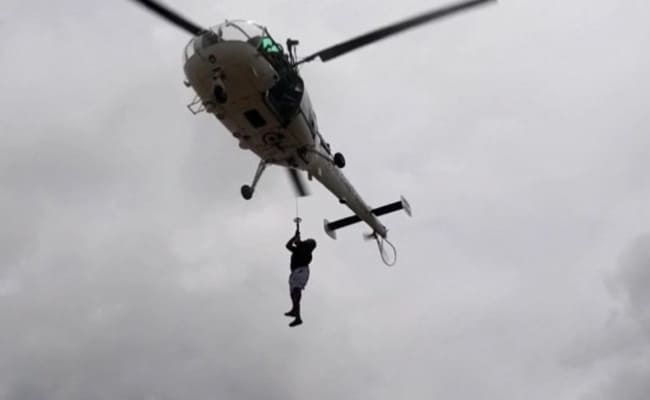 Tauktae: Navy has been conducting the rescue operation under challenging conditions (File)

Battling extreme weather, the Navy and Coast Guard have so far rescued 317 people on board two barges that went adrift in the Arabian Sea near Mumbai hours before Cyclone Tauktae made landfall on the Gujarat coast, but 390 more remain stranded or missing from offshore facilities, an official said on Tuesday.

The accommodation barge P305 which was servicing ONGC offshore operations has sunk, the official said, adding 180 of the 273 personnel on board were rescued till late evening.

While all the 137 people on board the cargo barge GAL Constructor were rescued, 180 of the 273 onboard P305 have been rescued so far, the official said.

SAR has also been augmented with P8I and naval helicopters, who continue to undertake an aerial search in the area. Since the commencement of the SAR from Monday, 180 survivors have been recovered so far, he said.

"In another operation, a Navy Seaking helicopter was launched to rescue the crew of GAL Constructor, which ran aground north of Mumbai. It rescued 35 crew members," he said.

SAR efforts are also in progress off the coast of Gujarat for three vessels - Support Station 3, Great Ship Aditi and Drill Ship Sagar Bhushan, which are 15-20 nautical miles south-east off Gujarat coast (Pipavav), he said.

"Navy ship INS Talwar has arrived in the area and taken over the duties of ''On-Scene Coordinator'' for coordination of the SAR effort. The Western Naval Command, in coordination with ONGC and DG shipping has diverted five tugs to render assistance.

The GAL Constructor barge was out of control for three days before the cyclonic storm led to its sinking, Avinash Aadke, a rescued worker said after being flown to Mumbai.

Mr Aadke also said help was being sought from the Coast Guard.

Proximity to land of the barge, which was anchored close to Alibaug near Mumbai and the presence of mobile connectivity resulted in help being redirected to assist other assets deep in the sea, he added.

Another rescued person from P305 said nobody tried to jump into the sea till the barge was afloat. All were together and safe till then, he added.

Deputy Chief of Naval Staff Murlidhar Sadashiv Pawar said the ongoing SAR is among the most challenging search and rescue operations he has seen in the last four decades.

"As we speak, four of our Navy ships are on-site – INS Kochi, INS Kolkata, INS Talwar and INS Betwa. For the last 20 hours, they have been battling to search and rescue as many people as they can through the night and the challenging weather conditions," he said.

"The main operation pertains to searching and rescuing people from the barge P305 which sank about 60 km from Mumbai at 7 pm on Monday. The main challenge is the weather itself. This is an extremely severe cyclonic storm with winds of 80-90 knots, wave heights of 6 to 8 metres, continuous rains, heavy clouding, and almost zero visibility," he said.