Cyclone Nisarga Could Hit Flights To Mumbai, 3 Other Cities

The second cyclone in the country in a fortnight, called Nisarga, is the biggest storm to make landfall near Mumbai in more than a decade. 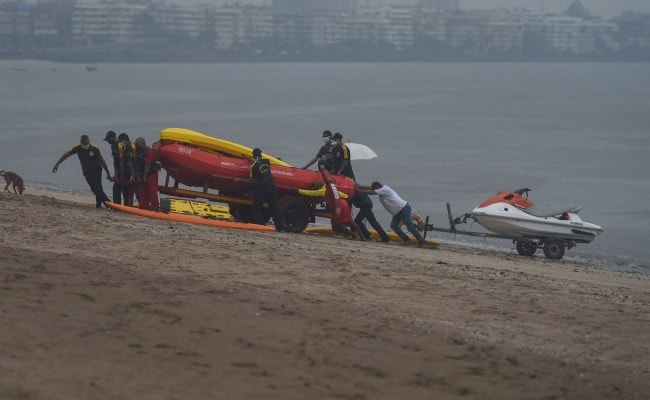 The storm will be intense enough to damage communication, electricity poles, trees, and plantations.

Mumbai shifted patients to safety from hospitals that may be vulnerable as it prepared for a cyclone that is likely to disrupt business in a city that's already facing the brunt of a virus outbreak.

Winds with speeds as high as 120 kilometers (75 miles) per hour will batter the city that's home to the country's central bank and the benchmark stock exchange, according to the India Meteorological Department. The second cyclone in the country in a fortnight, called Nisarga, is the biggest storm to make landfall near Mumbai in more than a decade.

The storm will be intense enough to damage communication, electricity poles, trees, and plantations. The Mumbai Metropolitan Region Development Authority has lowered heavy equipment at construction sites like the Mumbai Metro project. A temporary Covid-19 hospital, built in about two weeks on MMRDA grounds, can withstand winds of as much as 100 kilometers per hour and some 150 patients have been shifted to other premises, MMRDA said in a Twitter post.

The cyclone comes at a time when the country is slowly springing back to life after nearly two months of complete shutdown as the world's most-populous nation took stringent measures to check the spread of Covid-19. The outbreak in Mumbai has snowballed, with the city now accounting for more than a fifth of India's over 5,800 deaths and about 207,000 infections.

@MMRDAOficial : cranes and piling rig masts have been lowered at all project sites in view of #CycloneNisarga . pic.twitter.com/DP7OGTLoBC

It is likely to cross north Maharashtra coasts near Alibag and bring extremely heavy rains in the region, the weather office said in a statement. Phyan had hit India's western coast near the commercial capital in 2009. Nisarga follows Amphan, the worst cyclone over the Bay of Bengal since 1999 that displaced millions and killed more than 100 people across India and Bangladesh late in May.

The cyclone is adding to the country's misery as the pandemic has resulted in loss of livelihood and pushed millions into poverty because of the strict stay-at-home rules. As a result, the economy is heading for its first full-year GDP drop in more than four decades.

Mumbai is prone to heavy rains and floods, but cyclonic storms are rare in the mega city. Last year, the heaviest downpour since 2005 inundated the city, delaying trains and planes and spurring the city administration to declare a holiday.

The Jawaharlal Nehru Port Trust at Navi Mumbai has planned to sail out all berthed vessels after completing cargo work late on Tuesday, it said in an alert. All inward movements will be suspended until the weather condition improves, it added.

IndiGo, Asia's biggest budget airline by market value, said flights to or from Mumbai, Pune, Shirdi and Surat are likely to be impacted due to the cyclone, while Vodafone Idea Ltd. said it was taking all necessary precautions and, if needed, will work with other operators to open intra-circle roaming facilities.

However, the storm is unlikely to cause a major power outage in Mumbai as alternate transmission networks can be deployed to replace those damaged, according to Tata Power Co. Ltd. Most of the company's distribution network is underground and should be left unharmed by the cyclone, Sanjay Banga, president for transmission and distribution at the company said by phone.

A Reserve Bank of India spokesman in Mumbai said that all arrangements were in place for the smooth operation of settlement of trades and transactions.

Infosys Flies Back 200 Employees, Families From US In Chartered Flight