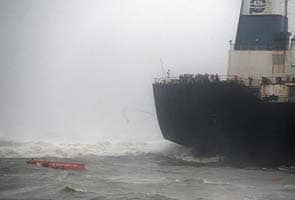 Chennai: As the bodies of two sailors of MT Pratibha Cauvery, which was grounded by cyclone Nilam, were found today, questions are being raised over the role of the ship's captain in the tragedy.

Six sailors lost their lives after a lifeboat they were using to leave the ill-fated ship capsized. While the body of one was found on Wednesday, the others were reported missing. Over the last two days, their bodies have been found at different places off the coast of Chennai.

Coast Guard sources have told NDTV that the vessel was not sea-worthy since October 2. It had been berthed at the Chennai Port since a month. Even as the threat of the cyclone intensified, the Captain, sources say, defied instructions to move to safe waters. The Chennai Port had asked the ship, berthed on the Outer Anchorage (OA) of the port, to head deeper into the north or eastwards as a precautionary measure before the severe cyclonic storm arrived.

The ship, anchored about 3.56 nautical miles from the Port, drifted and touched the shore near Elliots Beach in Chennai.

At this time, 22 of the 37 crew members on board abandoned the ship in a life boat that later capsized in the choppy waters owing to high velocity winds just hours before the cyclone hit the coast. While 16 managed to escape, one drowned and five others went missing - their bodies have now been recovered. Coast Guard helicopters rescued the remaining 15 sailors trapped on the ship on Thursday morning.

Sources say that the Captain went against orders to wait for evacuation till the cyclone made landfall. What's more, he also reportedly didn't ensure that the sailors wore life jackets with Coast Guard sources saying that only those without the safety gear died.

The Captain, sources say, also did not send a senior officer on the lifeboat - something that is mandatory.

Earlier, fingers had been pointed at the Coast Guard itself as also the Tamil Nadu government's Coastal Security Group for inadequate action. When the cyclone made its landfall, the ship's captain had sent out a distress call, but reportedly got no response. But both claimed that gusty winds and bad weather had prevented them from launching immediate rescue operations.

A Coast Guard official had said: "We do not monitor ships at ports, not even on a cyclone day. We rescue only when there is a call."

Meanwhile, the family of one of the sailors who died while trying to abandon the ship has filed a petition in court alleging that the vessel was not sea-worthy and had no food or fuel on board. The family has also demanded an interim compensation of Rs. 25 lakh and an eventual payment of Rs. 1 crore in its petition. Following this petition, the Madras High Court yesterday ordered that the ship not be moved from its current location, off the Besant Nagar beach. An emergency tow vehicle though is on its way to Chennai to pull out the ship when it can.

The Directorate General of Shipping (DGS) has also ordered a preliminary probe into the incident. According to DGS, the cargo vessel has 357 tonnes of fuel and 3.5 tonnes of diesel.
Comments
Cyclone Nilam