Cyclone Maha over the Arabian sea started weakening rapidly on Wednesday and turned into a ''deep depression'', and then a ''depression'' by today morning, it said. 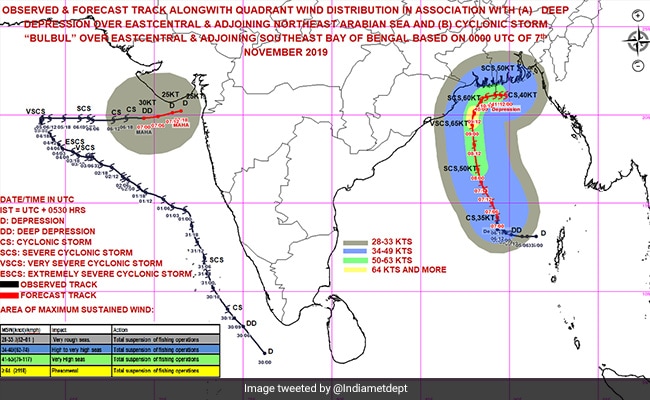 Parts of Gujarat saw downpour today between 6 am and 12 pm.

In a major relief to people of Gujarat, cyclone ''Maha'' fizzled out into the Arabian sea as a ''depression'' without making a landfall in the state, the India Meteorological Department (IMD) said today.

The cyclone over the Arabian sea started weakening rapidly on Wednesday and turned into a ''deep depression'', and then a ''depression'' by today morning, it said.

The ''depression'' is about 100 km south of Veraval coast of Gujarat, the IMD said in a release. "It is very likely to move east northeastwards and weaken into a well marked low pressure area off the south Gujarat coast during next 12 hours," it said.

The weather system would bring light to moderate rain in most parts of Gujarat during the next two days, it said.

''Maha'' is no longer a cyclone. It has become a depression into the sea without hitting the Gujarat coast. Rain may occur in most districts during the next two days," the Ahmedabad IMD centre's director Jayanta Sarkar said.

However, fishermen have been advised not to venture into the sea during the next 12 hours as the weather conditions there will be "rough to very rough" with wind speed reaching up to 40 to 50 km per hour, said the IMD release.

Unseasonal rain occurred in many parts of Gujarat between 6 am and 12 noon today due to the current weather system.