Cyclone Jawad Highlights: The Andhra Pradesh government has evacuated over 54,008 people from three districts till now and set up 197 relief camps. 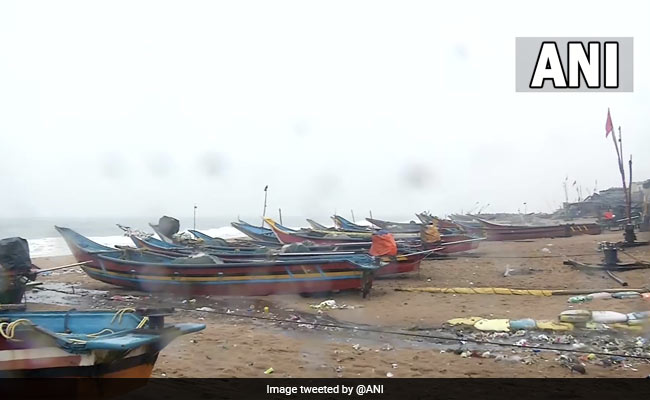 Cyclone Jawad is likely to recurve north-northeastwards and move along the Odisha coast. (File)

Cyclone Jawad is likely to reach north Andhra Pradesh and south Odisha this morning, the India Meteorological Department (IMD) has said. Puri in Odisha witnessed rainfall and high-speed winds early morning ahead of the cyclone's warning.

The Andhra Pradesh government has evacuated over 54,008 people from three districts till now and set up 197 relief camps in schools and community halls, while the Odisha government has ordered to keep the schools closed in 19 districts of the state.

According to the Met department, Cyclone Jawad lay centred at 5:30 pm of Friday over the west-central Bay of Bengal, about 300 km south-SE of Vishakhapatnam, 420 km nearly south of Gopalpur, 480 km south-SW of Puri and 560 km south-southwest of Paradip

"It is likely to move north-northwestwards, intensify further and reach the west-central Bay of Bengal off north Andhra Pradesh - south Odisha coasts by tomorrow, December 4 morning," said the IMD.

Here are the Highlights on Cyclone Jawad:

Dec 04, 2021 20:59 (IST)
Cyclonic Storm Jawad To Weaken Gradually During Next 6 Hours: Weather Office
The Cyclonic Storm ''Jawad'' is likely to move nearly northwards and weaken into a Deep Depression during the next six hours and then move north-northeastwards along Odisha coast and reach near Puri around December 5 noon, said the India Meteorological Department on Saturday, reported ANI.

Dec 04, 2021 20:06 (IST)
Cyclone ''Jawad'' Weakens Into Deep Depression: Weather Office
In a relief for Andhra Pradesh, Odisha and West Bengal, cyclonic storm ''Jawad'' weakened into a deep depression on Saturday and is likely weaken further into a depression by the time it reaches Puri on Sunday, the India Meteorological Department said.

The cyclonic storm weakened into a deep depression and lay centered over west-central Bay of Bengal, about 180 km east-southeast of Visakhapatnam, Andhra Pradesh, and 330 km south-southwest of Puri, Odisha at 5:30 pm, the Met office said in a statement.

Dec 04, 2021 19:01 (IST)
''Jawad'' Not As Strong As Expected, Seems To Be Weakening: Disaster Force Chief
National Disaster Response Force (NDRF) Director General Atul Karwal on Saturday said the impact of Cyclonic storm ''Jawad'' is not as strong as it was expected, and it is weakening.

The NDRF Director-General told ANI that "the impact would be less than we had earlier expected and the fact that the Cyclone seems to be weakening and not as strong as it was thought it might be."

The DG said there is rainfall in Coastal areas and light rainfall in other places, but electricity is not disrupted, mobile connectivity is still continued and there are no road blockages as of now.

Mr Karwal was explaining the present situation as the Cyclone has hit coastal areas of north Andhra Pradesh and Odisha since this morning.

While speaking to the media, Mr Biswas said, "The Cyclone Jawad was observed moving northwards in the past 1 hour and will continue the same for the next 12 hours. Weakening trend in the intensity of the cyclone and expected to hit the coastal regions of Puri tomorrow and will weaken gradually."

Mr Biswas further informed that the maximum wind speed is expected to be 75 Km/hr. "Only heavy to very heavy rainfall is expected and no storm warnings in any region. Traffic may be affected due to waterlogging. Evacuations have been done only in the low-lying and vulnerable areas along the coast," he added.

Industry associations like CII, FICCI, ASSOCHAM and PHD Chambers were also represented at the conference.

The minister underscored the need for drawing of a comprehensive action plan towards managing this natural disaster in the most effective way by incorporating the inputs and suggestions of all stakeholders.

Mr Goyal said public private partnership is necessary for disaster management and mitigation and for protecting the lives and livelihoods of those affected.

West Bengal | Light rainfall has already started and wind speed is expected to increase in a few hours. We are asking people in the coastal areas of old and new Digha to move to safer places: M Kalaiyasan 2nd Batallion, NDRF pic.twitter.com/W30bDzgb5B

All our response forces are deployed in the fields and some evacuation is also going on. People living in low lying houses are only being moved. As an impact of this cyclone, we expect large scale damage to paddy crops. Crop damage assessments are being done: Pradeep Kumar Jena

Dec 04, 2021 13:57 (IST)
Rainfall to increase, crops might be damaged: India Meteorological Department
Director General of India Meteorological Department (IMD) Mrutyunjay Mohapatra said that Cyclone Jawad can cause damage to crops but it will not be too bad, and rainfall activity will increase today in Andhra Pradesh and Odisha.
"The damage caused because Jawad will not be as bad as that of a cyclone. A few small trees may fall and people may witness the breaking of branches in the coastal areas. Thatched houses may also be impacted. Largely, it may impact the standing crops. It has been predicted that the three districts of north Andhra Pradesh and coastal districts of Odisha from Ganjam, covering Bhadrak, Balasore will be impacted," the Director General said.
He informed that Cyclone Jawad is moving northwards as predicted.
"As predicted, cyclone Jawad is moving north-northwest and is centred 230 km east of Visakhapatnam, Andhra Pradesh and 400 km south of Puri, Odisha. Collected cloud mass over north Andhra Pradesh and coastal Odisha districts has led to rain since last evening," he said.
Dec 04, 2021 12:19 (IST)

Odisha | The evacuation of people from vulnerable areas is ongoing. Teams for restoration of services like power and drinking water supply post-cyclone are ready. Those in cyclone shelters are being provided with hot meals: Samarth Verma, Puri District Magistrate
#CycloneJawadpic.twitter.com/gSrIJNHtKm

Dec 04, 2021 12:17 (IST)
Relief For Odisha, Andhra As Cyclone Jawad Likely To Weaken Into Deep Depression
Cyclonic storm 'Jawad' is likely to weaken into a deep depression before it reaches the Odisha-Andhra Pradesh coast by Saturday noon, officials said.
The development comes as a relief for the eastern state already battered by two cyclones in the last one year - 'Gulab' and 'Yaas'.
"It is likely to weaken gradually and move northwards during the next 12 hours and then north-northwards along the Odisha coast, reaching close to Puri as a deep depression," the India Meteorological Department said.
Dec 04, 2021 11:51 (IST)
Continuous rainfall, high-speed winds ahead of Cyclone Jawad landfall in Andhra's Srikakulam
Andhra Pradesh's Srikakulam district is witnessing continuous rainfall and wind speeds over 50 kmph ahead of Cyclone Jawad landfall.
As per the Collector of Srikakulam, "Rainfall is being witnessed across the district since yesterday. These are not heavy pours but it is raining continuously. In some parts of the district, wind speeds are being reported at 50-55 kmph. There are currently 79 cyclone shelters operations since yesterday."
"National Disaster Response Force, State Disaster Response Force and fire teams are on alert and have been deployed across the entire district," he added.
Dec 04, 2021 11:11 (IST)

#WATCH | Odisha: People vacating the Puri beach area with their make-shift shops & belongings, while the deployed police expedite the process in the wake of #CycloneJawadpic.twitter.com/eGfUkEsBUA

Dec 04, 2021 10:08 (IST)
UGC-NET, IIFT exam postponed in some centres over cyclone Jawad
The University Grants Commission - National Eligibility Test (UGC-NET) and an entrance exam of the Indian Institute of Foreign Trade (IIFT) that were scheduled for Sunday has been postponed in some centres of Odisha, Andhra Pradesh and West Bengal due to Cyclone Jawad.
The UGC-NET 2020 and June 2021 has been rescheduled for the centres in Visakhapatnam in Andhra Pradesh, and Puri, Bhubaneswar, Cuttack, Berhampur in Ganjam district and Gunupur in Rayagada district of Odisha, the National Testing Agency said in a notice on Friday.
Dec 04, 2021 09:55 (IST)

Andhra Pradesh | 11 NDRF, 5 SDRF, 6 Coast Guard, 10 Marine Police teams deployed in three districts of the state, in view of cyclone Jawad. 54,008 persons have been evacuated from low-lying areas of Vishakapatnam, Vizianagaram and Srikakulam

Schools Shut In 19 Districts Of Odisha Today Over Cyclone Jawad
In view of the impending cyclonic storm 'Jawad', the Odisha government has ordered to keep the schools closed in 19 districts of the state.
Dec 04, 2021 09:10 (IST)

Puri | Following #CycloneJawad warning, fishermen do not venture into the sea

Under the influence of the cyclonic storm, Puri witnesses rainfall and high-speed winds#Odishapic.twitter.com/H1MRhtehkE