The deep depression would move west-southwestwards and cross Ramanathapuram and Thoothukudi districts between Thursday night and Friday early morning with a wind speed of 50-60 kmph, gusting up to 70 kmph. 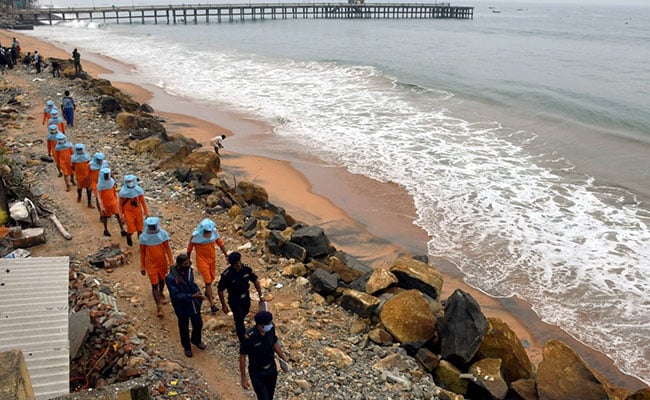 NDRF team at a seashore of Valiyathura, ahead of Cyclone Burevi, in Thiruvananthapuram.

Cyclone Burevi has weakened into a deep depression and will cross the Tamil Nadu coast on the morning of December 4, the India Meteorological Department (IMD) said on Thursday.

The IMD had earlier predicted that Burevi, which crossed the Sri Lanka coast on Wednesday night, would hit the Tamil Nadu coast as a cyclonic storm.

Deep depression is a stage of cyclone formation or de-intensification.

"Cyclonic storm Burevi over Gulf of Mannar weakened into a deep depression on 3rd December and is close to Ramanathapuram district coast, about 20 kilometres southwest of Pamban and 210 km east-northeast of Kanyakumari," the Cyclone Warning Division of the IMD said on Thursday evening.

The deep depression would move west-southwestwards and cross Ramanathapuram and Thoothukudi districts between Thursday night and Friday early morning with a wind speed of 50-60 kmph, gusting up to 70 kmph.

It is also very likely to further weaken into a depression (with a wind speed of 40-50 kmph, gusting up to 60 kmph) by Friday.

The IMD has already issued a red alert for south Tamil Nadu and south Kerala.

Tamil Nadu and other parts of south India receive rain due to the northeast monsoon from October to December. The formation of cyclones in the Bay of Bengal during this period is also a common occurrence.