The workers forced their way into the premises of the minister's house and emptied a basket full of crabs. 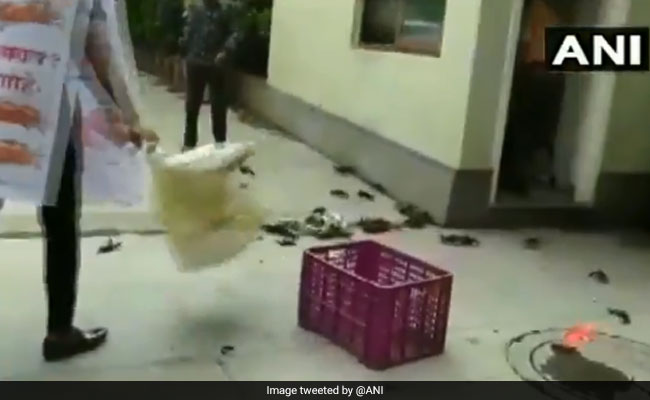 Heavy rainfall led to a breach in the Tiware Dam in Maharashtra's Ratnagiri on July 2.

Nationalist Congress Party workers on Tuesday threw crabs at Maharashtra Minister Tanaji Sawant's house in protest against his recent comment in which he said crabs were responsible for the breach in a Ratnagiri dam that killed nineteen. The workers forced their way into the premises of the minister's house and emptied a basket full of crabs. The incident was recorded on camera.

Heavy rainfall led to a breach in the Tiware Dam in Maharashtra's Ratnagiri district at around 9.30 pm on July 2. According to reports, the 19-year-old dam had shown signs of leakage. District authorities were told, locals said, but no repairs were carried out. The dam has a storage capacity of 20 lakh cubic metres.

Reacting to the tragedy, Mr Sawant had said that the leakage took place due to crabs gathered around them.

"There were no leakages earlier. Leakage happened after a large number of crabs gathered around the dam. Locals brought the issue to our notice and our department acted on it. The incident is unfortunate," Mr Sawant told reporters in Mumbai.

#WATCH: NCP workers stage protest and threw crabs outside the residence of Maharashtra Water Conservation Minister Tanaji Sawant in Pune against his statement on Ratnagiri's Tiware dam breach. The Minister had said that crabs were responsible for the breach in the dam. pic.twitter.com/7wbsT8yGIs

Speaking to reporters, Mr Awhad said the BJP-led state government was shameless, and Mr Sawant was trying to protect the contractor who was responsible for the tragedy.

"23 people were washed away, some are still missing, but the minister claims that crabs had weakened the dam," he said.

In Kolhapur, the NCP's youth wing presented a memorandum to Shahupuri police station, demanding registration of a ''case'' against crabs.

"If the minister thinks crabs caused the breach, then a case should be registered against the crabs under section 302 of the Indian Penal Code for murder," NCP state youth wing chief Mehboob Sheikh said.