'Cow Safer Than a Muslim in India': Shashi Tharoor in Parliament 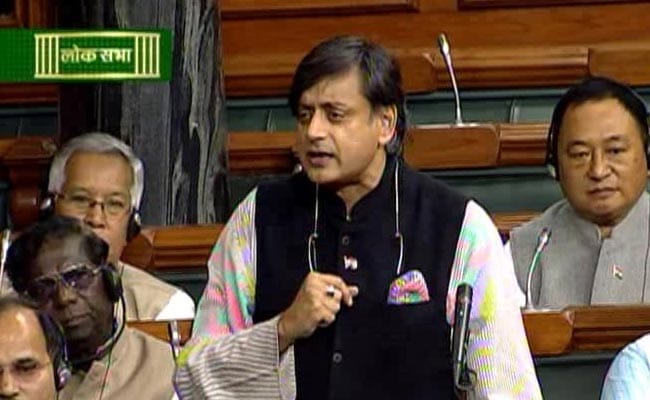 New Delhi: Stressing on 'growing intolerance' in the country, Congress leader Shashi Tharoor said on Tuesday that a cow was safer in India than a Muslim.

Participating in the debate on intolerance in the Lok Sabha, Mr Tharoor said a Bangladeshi friend of his on a visit told him that "Islamic fundamentalists in his country were having a field day attacking India as a place where it is safer to be a cow than a Muslim."

"They are such explosives who can destroy Indian ideology," he said following it with a Hindi couplet, "Mazhab nahi sikhata aapas mein bair rakhna" (Religion does not teach animosity against each other)

While Mr Tharoor made sharp attacks at the ruling government over 'intolerance', he spared some praise for its leader and said that Narendra Modi was a "different person" before becoming the Prime Minister. He cited how the then Chief Minister of Gujarat had avoided resorting to "divisive politics" unlike any "clever politician" when bombs exploded during his rally in Gandhi Maidan in Bihar in the run up to the Lok Sabha polls.

"He (PM Modi) continued his speech peacefully and so no one in the crowd of 3-4 lakh came to know of the blasts that had killed six people. He did not try to reap benefits of divisive politics," Mr Tharoor said.

Mr Tharoor said that India cannot sell itself to the world as a "land of pluralism, tolerance and Gandhianism while encouraging intolerance, communal hatred and minority insecurity within the country."

"But what has happened to Modiji now. Where has he lost is voice. After he became Prime Minister, he has forgotten the policy of taking along everyone. His senior party leaders are using political polarisation but he is silent," Mr Tharoor said.