COVID-19: Where Is India Headed?

Coronavirus India: This daily percentage decline appears to be a continuing trend so far - it has dropped from 3.7 per cent only a few weeks ago to 2.3 per cent currently 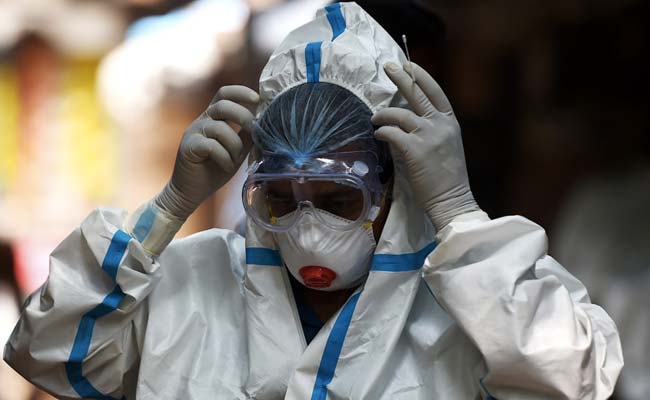 Coronavirus: Level of fatality rate in India consistently lower than in most countries

How many fresh Covid cases every day?

The rate of increase in new Covid cases is finally falling. A decline in the percentage increase - rather than a decline in absolute numbers - is the first indication of a possible "flattening of the curve" of the pandemic.

This daily percentage decline appears to be a continuing trend so far - it has dropped from 3.7 per cent only a few weeks ago to 2.3 per cent currently. 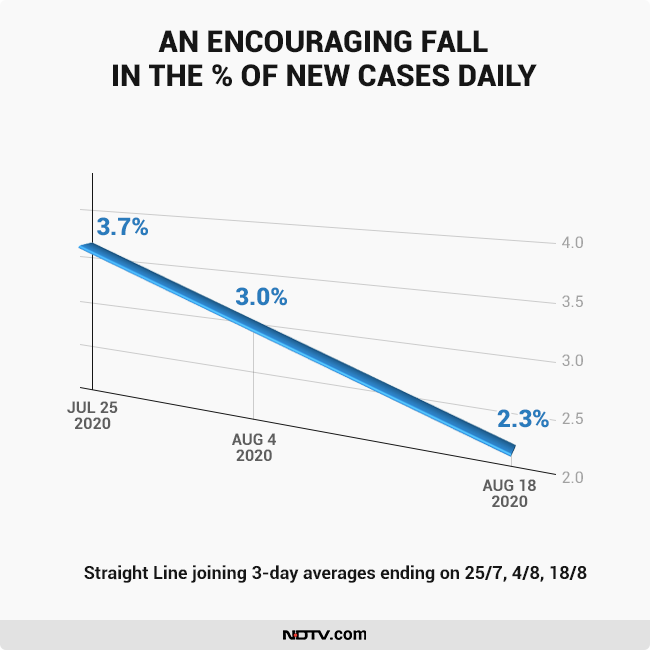 Yet, even this rate of increase is by far the highest in the world, so it is imperative that this declining trend continues.

At the current rate of increase, India will overtake Brazil in the total number of Covid cases by mid-September and could even overtake the United States by early October. If this declining trend continues and hopefully strengthens, this outcome will be avoided. 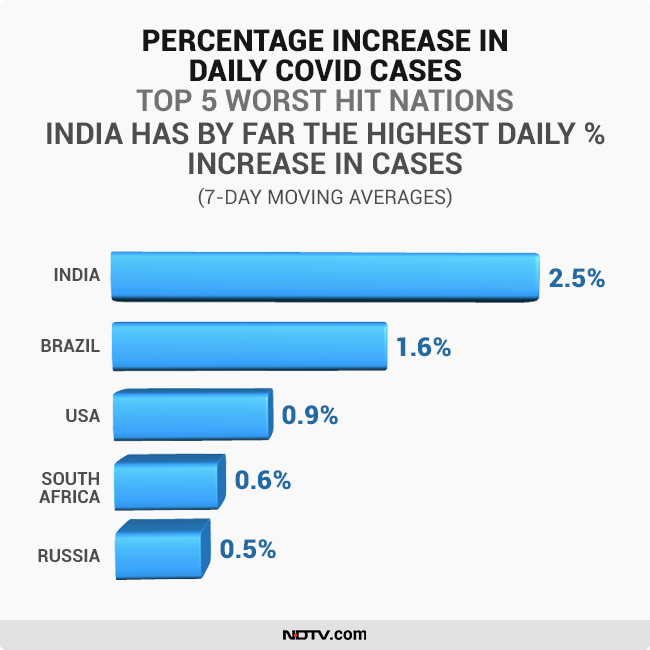 The rising number of tests

This drop in daily cases is not because we are conducting fewer tests - on the contrary, there has been a very rapid rise in the number of tests across the country: more than doubling in the last three-four weeks from 4.2 lakh tests a day in late July to almost a million tests (9 lakhs) a day now. This is an impressive increase in Covid testing across the country. 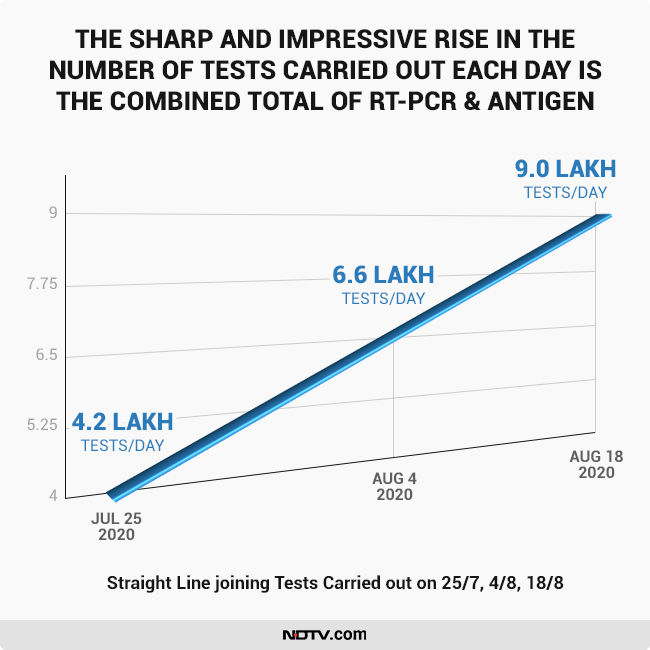 But there is a problem here. One reason for the increased tests is that many states are resorting to more Rapid Antigen Tests (RATs). Antigen tests are cheaper, quicker but less reliable than the traditional RT-PCR tests (see note 1 at the end).

However, as the antigen tests have a high false-negativity rate, there is a worrying possibility that this might partly explain the low percentage increase in cases. Are a large number of positive cases being left undetected due to the widespread use of unreliable antigen tests?

The level of fatality rate in India has consistently been lower than in most countries. The world average is 3.5 per cent to 4 per cent with some countries at a much higher level, like Italy at 14 per cent and Spain at 10 per cent. 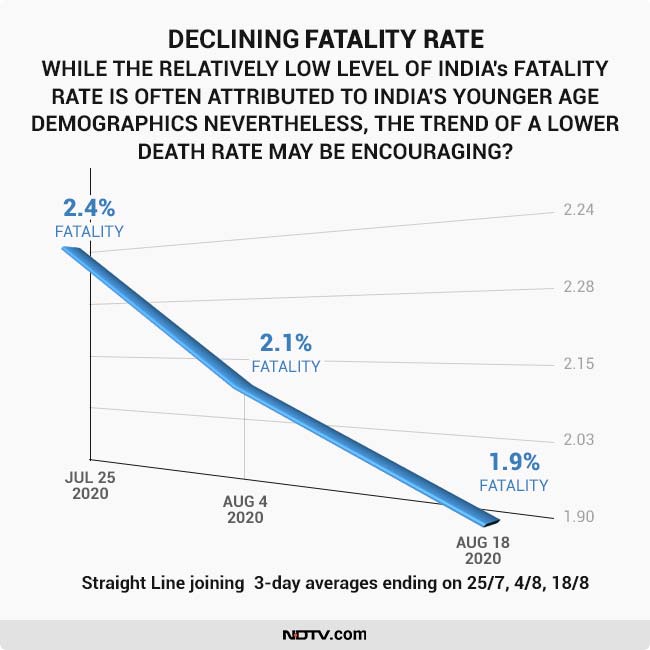 India is also seeing a trend of lower and lower fatalities, especially over the last three-four weeks, falling from 2.4 per cent to 1.9 per cent. Many have attributed the lower level of fatalities in India to our younger population (cf. Philip, Ray, Subramanian) - but it is nevertheless a welcome trend.

The "Reproduction Rate" (which measures how infectious the virus is) is perhaps the most commonly used measure across the world to gauge how well a country is combating Covid. The situation in India appears to be improving, with the R falling from 1.19 to 1.05. Unfortunately, the all-India figure hides the large variations between states - with some states showing disturbing new spikes (see here). Moreover, India has not met the first stage target of ensuring the R falls below 1.0 (many countries including the UK have ensured that R falls below 1.0 despite being at much higher levels than India a few months ago). 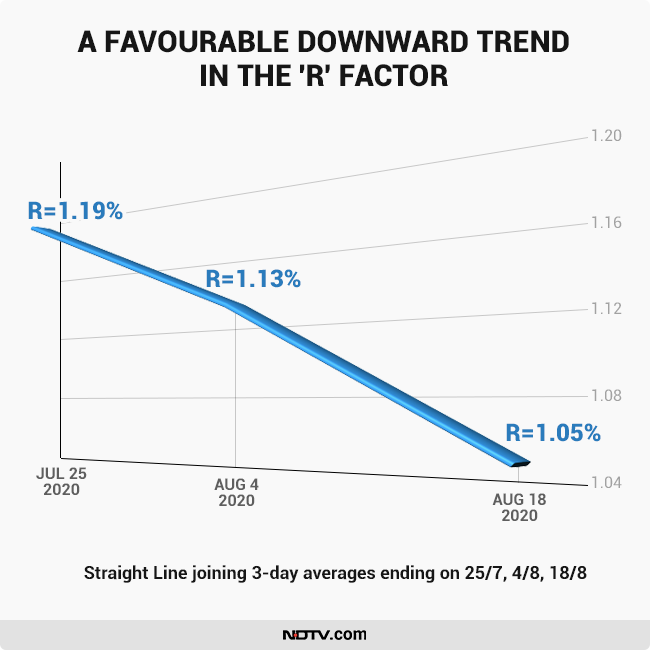 This suggests there is still some distance to go before, according to the R factor, India has the virus under control - and we must continue to watch out for second spikes and surges. Nevertheless, the downward trend in R over the last few weeks is an encouraging development.

Until recently, one of the variables most closely tracked to assess the impact and spread of Covid was the "positivity rate". A fall in the positivity rate was considered to be a very favourable sign. However, because of the increase in Rapid Antigen Tests, the Positivity Rate has lost its earlier significance when the standard testing methodology was only RT-PCR (see note 2 at the end). 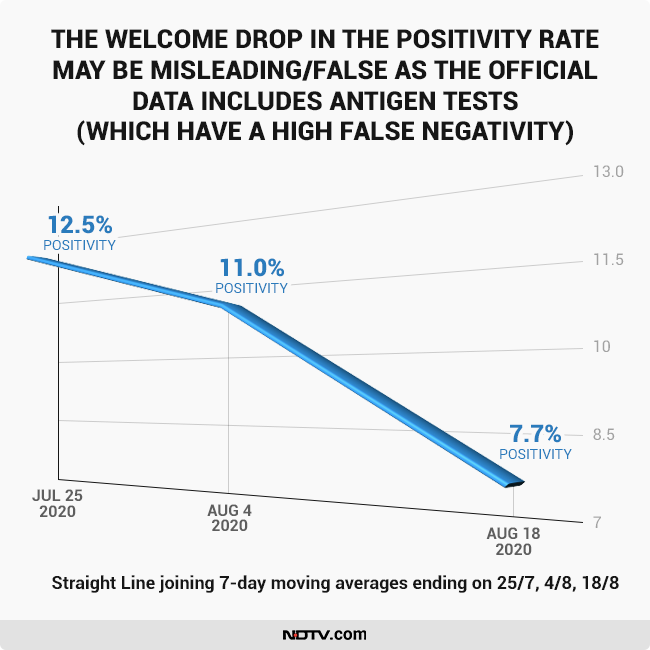 There is a clear distinction emerging in India between the "level" vs the "trend" in the coronavirus pandemic. There are several discernible encouraging "trends" vs unsatisfactorily high "levels" of the virus: a) New cases: the declining "trend" in the percentage of new cases is welcome - but the "level" of new cases remains the highest in the world; b)Testing: the rising "trend" in the number of tests - now at almost one million per day - is welcome, though the level of our testing number needs to be much higher given India's population; c) "R": the "trend" of the "R" factor declining every week is significant but the "level" of "R" remains above 1.0 which is worrying; d) Fatality: both the "level" of fatality rates (lower than many other nations) and the declining "trend" are positive developments.

A final word of advice from a pathologist: "After an antigen test if you are found to be negative for Covid - don't go balle balle."

Note 1: Medical literature widely reports that RATs have a false-negativity rate of 50 per cent to 60 per cent, compared with the false-negativity rate of 20 per cent-30 per cent associated with PCR tests. False-negativity, put simply, is illustrated thus: if there is a room with 10 people and all 10 are infected with coronavirus - a RAT test on each of the 10 persons would likely show that 5 or 6 of them are not infected. The PCR test on all would show that 2 or 3 are not infected. Consequently, when it is found that a person tests negative in a RAT test - this does not mean they are free of the virus - there is still a 50 per cent chance they are actually infected. Negative test results for antigen are not to be relied upon, only positive RAT results are useful information.

Note 2: Antigen tests have an important but very different role compared with PCT tests. The job of antigen tests, because of their speed and low cost, is to only identify positive cases. Negative results from antigen tests are widely considered to be meaningless (obviously a result of their high rate of false-negative results). Consequently, RAT results should not be mixed with PCR test results to get any aggregate positivity rate - the two tests involve completely different methodologies. The bottom line is that the rapidly falling positivity rate unfortunately may not be taken seriously as it could largely be a function of the increasing number of antigen tests. What needs to be seen is whether the positivity rate of only PCR tests is declining or not (but so far that data is increasingly difficult to extract from the government).