In Madhya Pradesh, 5 Siblings Orphaned By COVID-19 Beg For Survival

Since their parents' death, 10-year-old Nisha has assumed the role of father and mother for her siblings; her youngest brother is just seven months old 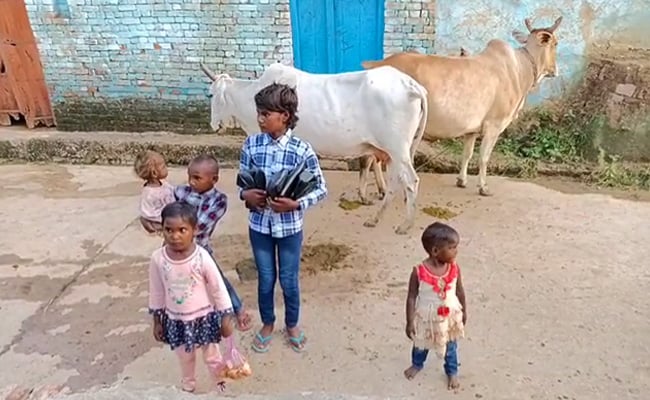 In June the NCPCR told the Supreme Court 3,621 children had been orphaned during the pandemic

Orphaned by COVID-19, five siblings from the Valmiki community in Madhya Pradesh's Bhind district have been reduced to living on the charity of residents of Amaha village.

The children - three sisters and two brothers, the youngest of whom is seven months old and the oldest 10 - don't even have a proper roof over their heads; they live in a partially damaged shack near a cremation ground; when it rains they scamper to a tin-roofed shed inside the grounds.

Their father - Raghavendra Valmiki, died in February and their mother - Girija - in June. Both succumbed to the coronavirus. Since then the children have been left to fend for themselves.

"Our parents died as the virus spread. We have nothing to eat... so we daily get food and milk from the villagers, who also provided us clothes. We request the government to provide us a house... food, drinking water and education," Nisha, the oldest child, said.

Since their parents' death, Nisha has assumed the role of father and mother for her siblings. They do have a grandfather who lives in the village, but locals say he does not care for them.

Any assistance that might come their way from the Madhya Pradesh government has been delayed for want of ID and documents.

Worse still, in May the state launched a special scheme for 1,001 children orphaned during the pandemic. The 'Mukhyamantri COVID-19 Baal Seva Yojna' is supposed to provide financial and food security for children, as well as taking care of their education.

The five children from Amaha village are not part of that scheme, despite local officials having been informed of their heartbreaking plight.

"We informed officers... but nothing happened. Former minister Govind Singh also informed officials, and then some documents were made... their lives depend on those papers," Sachin Sharma, one of the villagers taking care of the children, said.

"Other villagers got emotional when they saw the children's condition... they are doing what they can to help but it is a failure of the government. When the virus was spreading the government said we will help every person, but now..." Narendra Kaurav, another villager, said.

The local administration has now said they are planning to shift the children to a shelter home and a a team of women and child development officials has made a visit, but no date has been set.

"The matter has recently been brought to the notice of the administration. Already a team of women and child development officers visited the village for a survey. The team also advised the grandfather, who is not taking care of them," Satish Kumar, the Bhind District Collector, said.

"We're also trying to shift the children to a proper home... evidence is being collected to see if they can benefit under the Covid orphans scheme," he added. It is unclear specifically what evidence is required for five children who've been reduced to living in half-broken house and on handouts.

On Thursday the Supreme Court said states had to "protect" children who have lost either one or both parents during the pandemic, and ensure that their education is not disrupted. In May too the court told states they were responsible for the safety and education of children orphaned during the pandemic.

Authorities were urged to care for children "without waiting for an official order from this court".

The exact number of children orphaned by COVID-19 remains unclear even now, with conflicting reports from different agencies and questionable data from some states.

Last month Smriti Irani - the Union Minister for Women and Child Development - said 645 children lost their parents between April 1 and May 25 of this year alone.

In June the National Commission for Protection of Child Rights told the court that 3,621 children had been orphaned, 26,176 lost one parent and 274 were abandoned as a result of the pandemic.