Court Notice To Delhi, Poll Body Over "I Love Kejriwal" Message On Autos

The counsel for the Election Commission said the action was probably taken for violation of the model code of conduct (MCC) during which period political advertisements are prohibited. 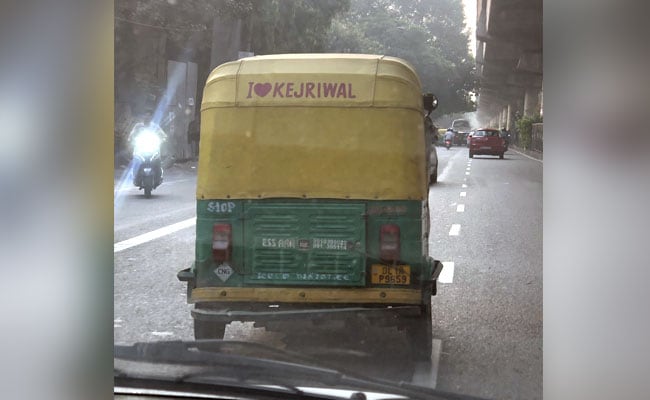 The petitioner had displayed "I love Kejriwal" and "sirf Kejriwal" messages on his auto.

The Delhi High Court on Tuesday sought response of the AAP government, police and Election Commission on a plea challenging a Rs 10,000 challan issued to an auto driver for displaying "I love Kejriwal" message on his three-wheeler.

Justice Navin Chawla issued notice to the Delhi government, police and EC seeking their stand on the plea by the auto driver who claimed the action stemmed from "political malice".

The lawyer for the Delhi government and police told the court that time was required to examine why the challan for Rs 10,000 was issued and said a status report would be filed.

The counsel for the Election Commission said the action was probably taken for violation of the model code of conduct (MCC) during which period political advertisements are prohibited.

The Election Commission's submission was opposed by the auto driver's lawyer who contended that firstly it was not a political advertisement and even if it was, it would not be prohibited as it was displayed at the petitioner's expense and not by a political party.

He said the model code of conduct does not talk of political advertisement out of an individual's own funds.

He also said that political advertisements were permitted on the rear, right and left sides of public service vehicles, including autos, under guidelines regarding this issued by the Delhi government in 2018.

After hearing brief arguments by all sides, the court asked them to file their respective replies before the next date of hearing on March 3.

It has claimed that the action was taken without any advance notice by any government department prohibiting such a display.

It has also claimed the petitioner was "illegally" challaned under various provisions of the Motor Vehicles Act for allegedly violating conditions of his permit to operate an auto.