Twenty people have been charged and more face action as the police investigate who was responsible for the event amid a complete ban on religious gatherings. A police officer has been suspended. 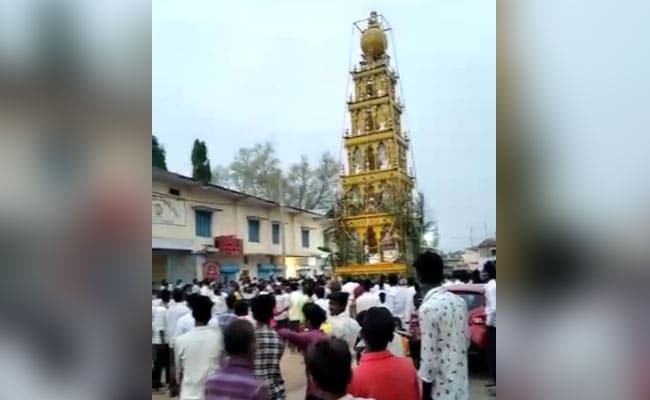 In photos, devotees were seen around a five-storey ornate chariot in Kalaburagi, Karnataka.

In the middle of a nationwide lockdown to slow the spread of coronavirus, a huge crowd gathered for a traditional chariot festival at a temple in one of Karnataka's hotspots. More than 100 participated at the event at Lord Siddhalingeswara Temple at Kalaburagi on Thursday, defying lockdown orders.

In photos, devotees were seen around a five-storey ornate chariot, taken out in a procession to worship Lord Shiva.

Five organisers of the festival have been arrested and two officials, including a policeman, have been suspended. Twenty people have been charged as the police investigate how the event was held despite a complete ban on religious gatherings.

"Today at 6.30 am, around 100-150 people had come near Siddalingeshwara temple for about 20 minutes and took part in chariot pulling procession," Superintendent of Police Lada Martin Marbaniang told news agency ANI.

The temple's officials had reportedly been warned against going ahead with the festival this year. Mr Marbaniang said the temple authorities had given a written guarantee that they would tone down the rituals and cancel the chariot-pulling tradition scheduled for Thursday evening. However, a chariot was seen on the road surrounded by a huge crowd earlier in the day, which took the administration by surprise. "Usually the function is conducted in the evening but perhaps they knew that if they try to do it in the evening police will be there," Mr Marbaniang said.

Kalaburagi was the first to report a coronavirus death in the country. Till Thursday, the district had 20 COVID-19 cases including three deaths.

Karnataka has 315 coronavirus cases, including 13 deaths. Thirty-six cases were reported on Thursday.

Prime Minister Narendra Modi on Tuesday extended till May 3 the nationwide lockdown to check the rapid spread of the contagion that has infected over two million worldwide.