Their two children - both less than five years old - were with them and survived the crash that, as per Lucknow Police, happened at 1.30 am on the city's Shaheed Path

Coronavirus: Lucknow cops are looking for the driver and car that ran down Krishna Sahu and his wife

A migrant worker from Chhattisgarh and his wife, stranded amid the coronavirus lockdown, set out from their settlement in Uttar Pradesh's Lucknow in the early hours of Thursday morning in a desperate bid to cycle back to their home village in Bemetara district - a distance of nearly 750 kilometres.

Minutes later the couple died in a road accident.

Their two children - both less than five years old - were with them and survived the crash that, as per Lucknow Police, happened at 1.30 am on the city's Shaheed Path, a prominent 23-km outer bypass road.

According to police, Krishna Sahu (45), his wife Pramila (40) and their children were hit by a speeding vehicle. The couple was rushed to a local hospital but neither could be saved. Custody of their children has been handed to Krishna's brother, after they were treated for injuries sustained.

Krishna used to work as a labourer in Lucknow; it is unclear how long he had been in the city before deciding to return home. His family and he lived in a heart-breaking poverty - one room in a jhuggi (slum) cluster with other people from his home district.

"They had no food or money, and had to find a way to feed their children. They thought they could resume farming in their village, or at least give their land on loan," Mohan Sahu, Krishna Sahu's neighbour, told NDTV, explaining why he had set out on such a perilous journey. 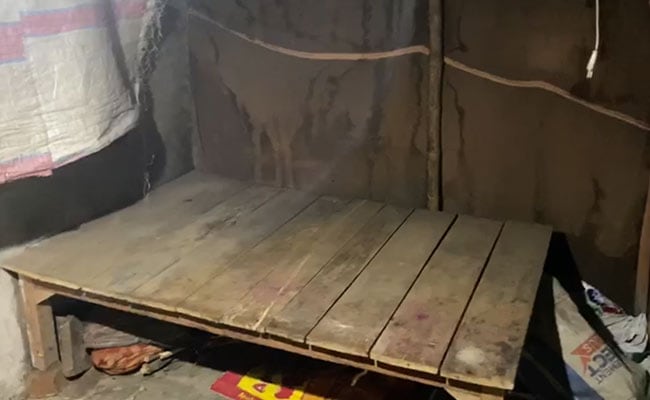 Coronavirus: Krishna Sahu and his family of four lived in a one-room slum house on a rent of Rs 800

"All four members lived in that one room; the son was one-and-a-half years old and the daughter was four years old," Mohan Sahu said, adding that they paid Rs 800 as monthly rent.

According to his neighbour, Krishna Sahu had been in Lucknow for 7 to 8 years and had been living in the slum for around nine months.

Other residents of the jhuggi say they spoke to some officials from Chhattisgarh and that help was promised but it never came. They reportedly also tried to register at a local UP government office in order to get a ticket on a train home, but were chased away by cops.

Police are still looking for the vehicle and driver that ran the couple down.

A few days ago NDTV reported on migrants from Madhya Pradesh and Chhattisgarh unable to survive in the UP capital because of the extended lockdown that has left them without jobs, money, shelter or food.

Driven to desperation, thousands are trying to cycle, or even walk, across entire states. For some the journey involves as much as 800 or 900 kilometres.

Some have made it home, braving searing heats and government restrictions on interstate movement. Many others, like Krishna and his wife, have died. This morning, 15 migrants trying to walk 150 km home were run over by a goods train in Maharashtra's Aurangabad district.

On Thursday Uttar Pradesh Chief Minister Yogi Adityanath said no migrant labourer should have to walk back home from big cities like Delhi. The state government "has been actively engaged in bringing them (migrants) back safely", a statement from the Chief Minister's office read.

The centre, reportedly driven by fear of political backlash over the migrants' plight, has permitted special trains run by the Indian Railways to carry stranded people back to their home states.

Some, however, have continued to try and walk or cycle home, pointing out that the trains either take too long or are too difficult to access; passenger lists are prepared by the respective state governments.

There has also been controversy over the Railways charging migrants, many of whom are already broke, for the journey, prompting the Congress to hit out at the Narendra Modi government.

In its clarification this week the government said 85 per cent of the fare will be borne by the railways and the rest by the respective state governments.