Coronavirus India Highlights: The total recoveries across the country increased to 3,13,02,345 with 42,295 patients recovering during the last 24 hours. 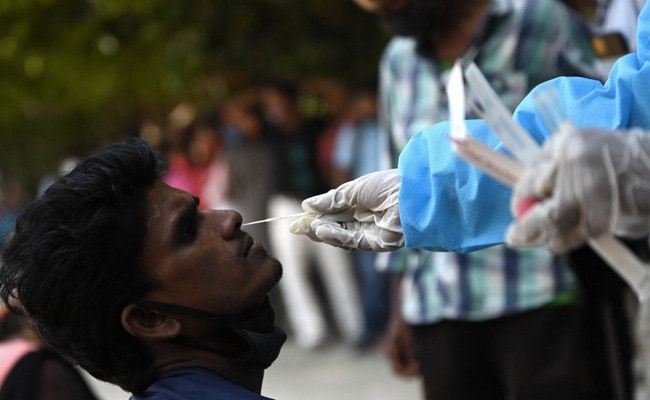 Mumbai reported 285 new coronavirus infections and four fatalities on Friday, taking the tally of cases in the city to 7,38,807 and death count to 15,979, a Brihanmumbai Municipal Corporation (BMC) official said.

The financial capital of the country witnessed a slight increase in new cases. On Thursday, it had recorded 279 new infections and seven fatalities.

The total recoveries across the country increased to 3,13,02,345 with 42,295 patients recovering during the last 24 hours. As many as 52.95 crore vaccine doses have been administered so far under Nationwide Vaccination Drive, including 57,31,574 in the last 24 hours.

Here are the highlights on coronavirus (COVID-19) cases:

However there had been no new infections in many hotspots in recent days owing to stringent virus control measures, they added.

In the study published in the journal ACS Central Science, the researchers immunised mice with nanoparticles that mimic SARS-CoV-2, the virus that causes COVID-19, by displaying multiple copies of the receptor binding domain (RBD) antigen.

Most protein-based vaccines train the immune system to recognise the RBD, a portion of the SARS-CoV-2 spike protein, which the virus uses to enter and infect human cells.

Aug 14, 2021 01:28 (IST)
Himachal Makes Negative RT-PCR Covid Report Mandatory For Entering State
People willing to visit Himachal Pradesh will now have to provide an RT-PCR report of a minimum of 72 hours old as the state government on Friday made Covid-19 negative certificate mandatory for anyone who wants to enter the state.

This was decided by the state cabinet on August 10. "It was important to implement this decision to protect the lives of the people. The priority of the government is to protect the people from Covid. Anyone entering the state will have to show a minimum of 72 hours old RT-PCR test report. A person who has got both the jabs of covid-19 vaccine can be allowed to enter the state," Health Minister of the State, Rajiv Saizal said.

The financial capital of the country witnessed a slight increase in new cases. On Thursday, it had recorded 279 new infections and seven fatalities.

Notably, on the fifth day in a row, the daily rise in infections remained below 300.

The daily deaths due to the pandemic in the city dipped below five for the third time this month.

With 37,052 coronavirus tests conducted in the city since Thursday evening, the total of samples tested so far rose to 85,80,084, the official said.
Aug 13, 2021 21:53 (IST)
Israel Begins COVID-19 Booster Shots For People Aged 50 And Above
Israelis aged 50 and over began receiving vaccine booster shots against the coronavirus Friday as part of a government bid to stem spiking infections driven by the Delta variant.

The government announced on Thursday that it was offering third shots to people aged over 50, two weeks after launching a campaign to give the elderly booster jabs.

"This is an important step in the fight against the Delta pandemic," Prime Minister Naftali Bennett said in a statement.

Israel was one of the first countries to launch a vaccination drive in mid-December via an agreement with Pfizer to obtain millions of paid doses in exchange for sharing data on their effectiveness.

The campaign helped to drastically bring down infections, but that trend has since reversed, driven by the spread of the Delta variant in unvaccinated people as well as those whose immunity has waned six months after they got their initial shots.

"Starting this morning, people between the ages of 50 and 60 have been vaccinated at Clalit clinics across the country," said Ran Balicer, chief innovation officer at Clalit Health Services and the chairman of Israel's national expert panel on Covid-19.


Aug 13, 2021 21:23 (IST)
Pregnant, lactating women to get Covid vaccine at their check-up facilities in Delhi
Pregnant and lactating women will be able to get vaccinated against COVID-19 at the clinics where they go for their ante-natal and post-natal check-ups, according to an official order issued by the Delhi government.

This means that lactating women will be able to get themselves vaccinated at the sites where they go for routine immunisation of their children.

"In order to enhance coverage of vulnerable cohort of pregnant and lactating women, it is directed that their COVID-19 Vaccination may be done at the health facility site where they report for their regular ANC/PNC check-up, on the designated days of the week," the order said.
Aug 13, 2021 21:03 (IST)
Restaurants In Bengal Can Now Remain Open Past 8 PM: Here's What's Allowed
Bengal announced further relaxation of curbs in the state a day after extending the Covid-19 restrictions till August 31. Now, stadia, auditoriums, open-air theatres for cultural activities, theatre halls, and swimming pools will be allowed to operate at 50% capacity in the state from August 16, an official order said.

Restaurants in the state will be allowed to remain open till 10:30 pm - an extension of the earlier 8 pm deadline - from Monday.

This is the ninth time since the second Covid wave that zero fatalities were recorded in the national capital.

Before the second wave swept the country in April-May, Delhi reported zero deaths due to the virus on March 2, reported news agency PTI. On that day, the number of single-day infections stood at 217 and the positivity rate was 0.33 percent.

In the last 24 hours, 84 patients were discharged after recovery in Delhi which took the total recoveries to 14,11,452.

Aug 13, 2021 18:15 (IST)
33 Punjab Students Test Covid Positive As State Ramps Up Testing In Schools
Over 30 students tested positive for coronavirus in Punjab as the state ramped up testing in schools just days after offline classes began for the first time since the outbreak of the pandemic on August 2.

"Our government has started a new system wherein school students are also being tested. So far, more than 21,200 tests have been done and 33 students have tested positive for Covid," Punjab Health Minister Balbir Singh Sidhu was quoted as saying by news agency ANI.

The decision to conduct Covid tests in schools was taken at a Covid review meeting chaired by Punjab Chief Secretary Vini Mahajan. Directions to conduct at least 10,000 Reverse Transcription Polymerase Chain Reaction (RT-PCR) tests daily at Punjab schools were issued after the meet.

Aug 13, 2021 17:29 (IST)
3 Deaths In Maharashtra From Delta+ Variant, Mumbai Sees 1st Death
Three deaths from the Delta Plus Covid variant have been reported from Maharashtra, including one in Mumbai, at a time the state is trying to ease tough restrictions in place for months. A 63-year-old woman who died on July 27 is reported to be Mumbai's first Delta Plus death. A 69-year-old man has also died in Raigad from the strain. An 80-year-old woman from Ratnagiri died last month.

The Mumbai woman, who tested positive on July 21, had several comorbidities including diabetes, according to officials. She was fully vaccinated and among seven patients in the city whose reports turned out positive for the Delta Plus, a mutation of the highly contagious Delta variant that drove the deadly second wave of Covid in April-May.

Coronavirus: Israel Begins COVID-19 Booster Shots For People Over 50
Israelis aged 50 and over began receiving vaccine booster shots against the coronavirus Friday as part of a government bid to stem spiking infections driven by the Delta variant.
Aug 13, 2021 14:06 (IST)

Coronavirus: 3 Deaths In Maharashtra Linked To Delta Plus Variant, Mumbai Sees 1st Death
Mumbai has reported its first death from the Delta Plus Covid variant. A 63-year-old woman died on July 27 after testing positive on July 21. She had several comorbidities including diabetes, according to officials.
Aug 13, 2021 13:50 (IST)

Coronavirus: West Bengal Extends COVID-19 Curbs Till August 31. Here's What Is Allowed
Auditoriums and swimming pools in West Bengal can operate at 50 per cent capacity from Sunday, Chief Minister Mamata Banerjee announced today, as the state extended COVID-19 restrictions till August 31, with some relaxations.
Aug 13, 2021 13:43 (IST)
South Korea Signs New Pfizer Vaccine Deal; Asks People To Cut Travel
South Korea on Friday signed a deal to buy 30 million doses of Pfizer's COVID-19 vaccine for 2022, and the government urged people to cut holiday travel amid a worsening fourth wave of infections and a slow inoculation campaign. Prime Minister Kim Boo-kyum asked companies to be flexible about allowing people to work from home and urged those returning from holiday to get tested, especially before clocking in for work.
Aug 13, 2021 13:00 (IST)
Puducherry Adds 113 New COVID-19 Cases, Overall Tally Goes Up To 1,22,102
The union territory of Puducherry logged 113 fresh coronavirus cases during the last 24 hours, taking the overall tally to 1,22,102, a senior official of the Health Department said on Friday.
No fresh fatality was reported from any of the four regions of Puducherry, Karaikal, Mahe and Yanam in the last 24 hours.

Coronavirus: US Authorises Covid Booster Jabs For Those With Weak Immune Systems
The United States on Thursday authorized an extra dose of Covid vaccine for people with weakened immune systems, as the country struggles to thwart the Delta variant.
Aug 13, 2021 11:29 (IST)

Coronavirus: Mumbai Records First Death From Delta Plus Covid Variant
Mumbai has reported its first death from the Delta Plus Covid variant. A 63-year-old woman died on July 27 after testing positive on July 21. She had several comorbidities including diabetes, according to officials.
Aug 13, 2021 11:04 (IST)

As per experts' suggestions state govt had decided to open schools. Now CM has called an emergency meeting with them soon after his return from his official tour to Dakshina Kannada

Aug 13, 2021 09:31 (IST)
India Reports 40,120 New COVID-19 Cases, 585 Deaths In Last 24 Hours
India reported 40,120 new COVID-19 cases and 585 deaths in the last 24 hours. As many as 52.95 crore vaccine doses have been administered so far under Nationwide Vaccination Drive, including 57,31,574 in the last 24 hours, according to the government. India's active caseload currently is 3,85,227, which comprise 1.20% of the total cases and is the lowest since March 2020. The total recoveries across the country increased to 3,13,02,345 with 42,295 patients recovering during the last 24 hours.
Aug 13, 2021 09:24 (IST)
COVID-19 India News: Maharashtra's Thane Records 233 New Cases, 11 Deaths
The coronavirus caseload in Thane district of Maharashtra has increased by 233 to 5,47,641, an official said on Friday, reported PTI. These cases were reported on Thursday, he said. With the virus claiming the lives of 11 persons during the day, the death count in the district rose to 11,161. Thane's COVID-19 mortality rate is 2.03 per cent at present, he added. In neighboring Palghar, the infection count has gone up to 1,33,883, while the death count is 3,226, another official said.
Aug 13, 2021 07:26 (IST)
Onam Celebrations Should Be Kept Minimum In View Of Covid: Kerala Police
Kerala police chief Anil Kant evaluated the security arrangements to be made in view of Onam celebrations and gave instructions to senior police officers and district police chiefs via video conference on Thursday. In a meeting, police chief Anil Kant said that in the context of COVID-19, "all kinds of celebrations during Onam should be kept to a minimum." "Onam feast and other celebrations should be done inside the houses. Those who visit beaches and tourist points must ensure that they comply with all COVID-19 regulations," he stated.
Aug 13, 2021 06:28 (IST)

Aug 13, 2021 05:59 (IST)
1,317 People Vaccinated During Door-To-Door Campaign: Mumbai Civic Body
In a reply to a petition filed in Bombay High Court in the matter of door-to-door vaccination drive for bed-ridden people, the Brihanmumbai Municipal Corporation (BMC) on Thursday informed the court through an affidavit that of the 4,889 people who registered for the campaign, 1,317 were vaccinated till August 9.

"Till August 9, a total of 4,889 people have registered themselves as beneficiaries for the door-to-door vaccination campaign for bedridden people. BMC has vaccinated 1,317 bedridden persons till August 9," the affidavit read.

Aug 13, 2021 05:57 (IST)
WHO Urges China To Share Raw Data On Early COVID-19 Cases
The WHO on Thursday urged China to share raw data from the earliest Covid-19 cases to revive the pandemic origins probe -- and release information to address the controversial lab leak theory.

The World Health Organization stressed it was "vitally important" to uncover the origins of the worst pandemic in a century, which has killed at least 4.3 million people and battered the global economy since the virus was first detected in the Chinese city of Wuhan in December 2019.