As the news of the outbreak began emerging, the Indian Embassy stepped up efforts to locate hundreds of Indians, residing in the central Hubei province, Vikram Misri said. 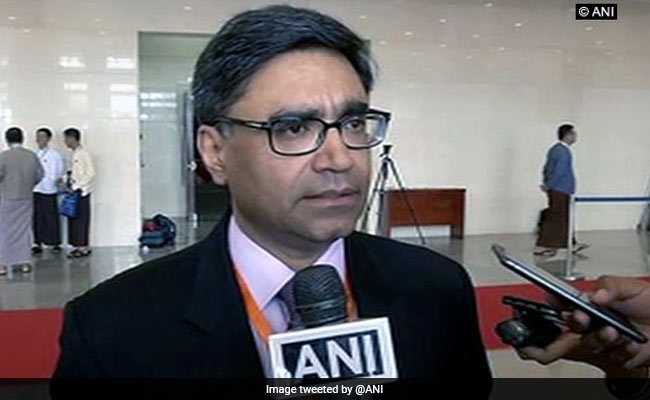 India's efforts to evacuate its citizens from the coronavirus-epicentre Hubei province and its capital Wuhan were a logistical nightmare since the entire operation had to be done in a region sealed from all sides, Indian Ambassador to China Vikram Misri said on Monday.

As the news of the outbreak began emerging in the middle of January, the Indian Embassy stepped up efforts to locate hundreds of Indians, mainly students, residing hundreds of kilometres apart in the central Hubei province and Wuhan - the epicentre of the virus outbreak, Mr Misri said.

It was a logistical nightmare as data had to be collected about Indians stranded in the virus-hit areas while many left for home for the Chinese New Year holidays, he told news agency PTI.

India issued its first travel advisory on January 17 which was followed by more stringent measures including cancellation of visas for Chinese and foreigners travelled to China as the virus grew more virulent.

Mr Misri said the embassy had to first locate the Indian citizens in Hubei province, establish contacts with them, receive their consent for a 14-day quarantine, followed by the most difficult part of the operation - to get approvals from China's central, provincial and local governments as the city and province were locked down from January 23.

Wuhan, which has a number of higher educational institutions, including medical colleges, is situated over 1,150 kms from Beijing. Wuhan has attracted hundreds of Indian students to study medicine and other professional courses in the city's universities.

Ahead of the first Air India flight on February 1, the mission sent two of its diplomats - Deepak Padma Kumar and M Balakrishnan - to Wuhan by road through Changsha city despite travel bans and fears of the virus.

Then a large number of buses were hired, permits procured in areas under lock down to transport them to the airport which turned out to be a massive exercise. The airport was closed from January 23 besides all local transportation.

The operations to get permission to operate buses and send them to 40 odd locations to pick up waiting Indians were coordinated by Acquino Vimal, the deputy ambassador, and Priyanka Sohoni, First Secretary (Political) in the mission.

In some areas, roads were dug up to prevent people's movement and entire operation to pick up the students on both the days had to be conducted from the control room in the embassy hundreds of miles away, Mr Misri said.

But 10 Indians could not make it to the flight as they were not allowed by the Chinese immigration officials to board the plane because they had high body temperatures.

Air India's B747 aircraft made two flights to Wuhan city - the ground zero of the coronavirus epidemic that has killed more than 900 people, infected 40,000 others and spread to 25 countries, including India, the US and the UK.

In the first flight, 324 Indians were evacuated and another 323 Indians and seven Maldivian citizens were flown back in the second flight.

Sri Lanka and Bangladesh also evacuated their citizens through special flights. Several hundred Pakistani students are held up still in the virus-hit areas as their government has declined to evacuate them ignoring their pleas.

Misri said that about 80 Indians were still in Hubei and the embassy is in touch with them through e-mail, social media and phone calls.

The embassy has received 28,000 emails and receives about 100 calls a day from Indians who were stranded in Wuhan and Hubei province and has been coordinating with the Chinese officials to ensure proper supplies to them.

About chances of their evacuation, Misri said the embassy is exploring all avenues.