Of 22.5 inter-state migrant workers, 11.5 lakh are employed in and around Surat alone, the government said. 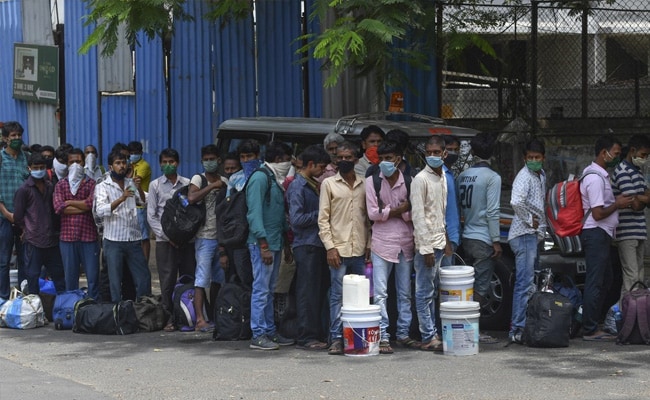 Of 22.5 lakh migrant workers in Gujarat, only 7,512 were registered under the Inter-State Migrant Workmen (IMW) Act and were thus eligible for travel allowance, the state government has informed the Gujarat High Court.

In a written reply to a Public Interest Litigation, the government informed a division bench of Justices JB Pardiwala and IJ Vora on Friday that around 22.5 lakh inter-state migrant workers lived in Gujarat as per the state labour department's data.

But the provisions of the IMW Act of 1979 were applicable to only 7,512 workers who were registered under the Act, it said.

"Most of the 22.5 lakh migrant workers have come on their own and provisions for payment of travel and displacement allowances as required by section 14 and 15 of the IMW Act, 1979, were not applicable to them," it said.

Under sections 14 and 15, contractors are required to pay travel and displacement allowances to workers.

The court was hearing a PIL filed by lawyer Anand Yagnik alongwith a suo motu petition (a petition initiated by the HC on its own) and other pleas seeking a direction to the government to provide free transport facility to migrant workers stranded due to coronavirus lockdown.

Of 22.5 inter-state migrant workers, 11.5 lakh are employed in and around Surat alone, the government said.

By May 31, only 1.5 lakh migrant labourers would be left behind in Surat, of which 1.15 lakh had already returned to work, it said. Around 3.94 lakh workers from other districts of Gujarat were also employed in Surat but most of them returned to their hometowns in 30,975 buses, the reply said.

The state government also told the court that the Railways had been collecting transportation charges from workers even though travel arrangements were being made at the district-level by NGOs and civil society organisations.

States including Odisha, Uttar Pradesh and Tamil Nadu have said they would reimburse travel expenses to the Railways directly, it said.

"No migrant worker has been denied travel to his hometown on account of non-payment of travel charges," the Gujarat government claimed.

The lockdown on account of coronavirus has seen a virtual exodus of migrants to their home states.