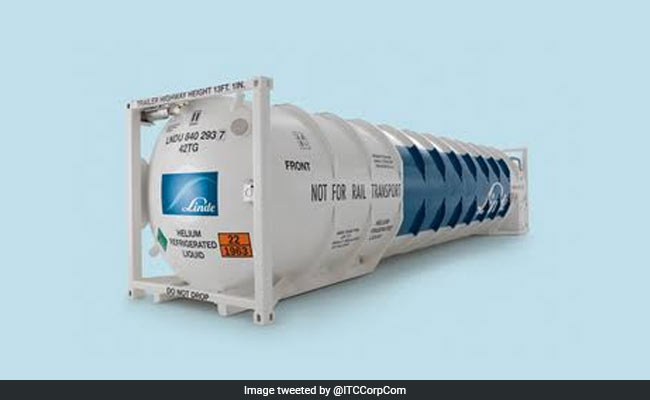 The ISO-certified tanks will be flown in from neighbouring Asian countries in collaboration with Linde - a privately-held German company that is also a major supplier of medical oxygen.

"To serve the national priority and the government's effort in easing bottleneck of medical oxygen supply to hospitals, ITC is airfreighting 24 cryogenic ISO containers from Asian countries in collaboration with Linde India Ltd." the company's tweet read.

ITC also said it was airlifting "large numbers of oxygen concentrators" and that its paper production facility in Telangana's Bhadrachalam had begun supply of oxygen to neighbouring areas.

The centre has reportedly assigned Indian Air Force (IAF) planes to help in this operation. IAF assets are already airlifting empty tankers to oxygen production facilities across the country.

Earlier this week the Tata Group made a similar announcement, which Prime Minister Narendra Modi - whose government has been accused by some of not caring as lakhs suffer because of the pandemic - called a "compassionate gesture".

In this spirit, the private German company Linde together with Tata have managed to secure 24 oxygen transport tanks that will be airlifted to India in order to increase transport capacity from production sites to Covid19 hotspots.

Separately, the Defence Ministry will also airlift 23 mobile oxygen generating plants from Germany, according to news agency PTI. Each plant - to be deployed at Armed Forces Medical Services (AFMS) hospitals - will have a capacity to produce 40 litres of oxygen per minute and 2,400 litres every hour.

Over 72 hours into the oxygen crisis in the country - and nearly as many into a Delhi High Court hearing on the subject - hospitals continue to red-flag depleting oxygen reserves by the hour.

And people continue to die - for lack of something those fortunate enough to not be infected by the coronavirus breathe, with no effort or cost - every second.

This morning six people died at a private hospital in Punjab's Amritsar.

At Delhi's Jaipur Golden Hospital, 25 people died Friday night because of a lack of oxygen.

At least 25 people died at Delhi's Sir Ganga Ram Hospital on Friday before oxygen tankers arrived; the hospital chairman told NDTV it was unclear how many were due to oxygen deprivation, but stressed that the crisis was very real.

Multiple hospitals have issued frantic appeals for help; this morning Delhi's Moolchand and Batra hospitals joined that list. Chief Minister Arvind Kejriwal and his counterparts have been similarly frantic in their appeals.

The centre - under immense fire - is scrambling to increase production and distribute it evenly. It is also racing to import oxygen - as much as 50,000 metric tonnes - to bridge the immediate gap.

India is battling a tsunami of infections - this morning nearly 3.5 lakh new cases were reported. The active caseload is now over 25.5 lakh and the number of deaths is rapidly closing on two lakhs.

The Delhi High Court, in its marathon hearing on this issue, today said "we will hang that man" - referring to anyone who obstructs oxygen supply.