"Sold Wife's Jewellery": He Converted His Auto-Rickshaw Into Ambulance

After selling his wife's jewelry, the 34-year-old learnt how to use the oxygen cylinder and the oximeter from a doctor in order to help the people whom he would ferry in his auto-rickshaw. 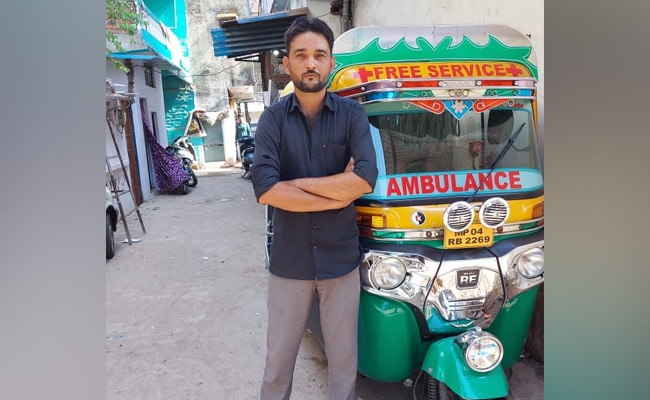 Javed Khan converted his auto-rickshaw into an ambulance.

Before the raging second wave of the Covid pandemic, 34-year-old Javed Khan was just another auto-rickshaw driver in Madhya Pradesh's capital Bhopal. But as Mr Khan watched how the deadly wave left people stranded for medical treatment across the country, he decided to turn his bread-winning vehicle into a 24x7 ambulance service, equipped with an oxygen cylinder, hand-sanitiser, PPE kit and oximeter.

"I saw on social media and news channels how people were being carried to hospitals but due to the shortage of ambulances, they were not getting them. So, I thought I should come forward for the sake of humanity. I sold my wife's locket, arranged an oxygen cylinder and converted my auto-rickshaw into an ambulance," Mr Khan said.

After selling his wife's jewellery, Mr Khan learnt how to use the oxygen cylinder and the oximeter from a doctor in order to help the people whom he would ferry in his auto-rickshaw. The equipment was given to Khan by a donor.

Owing to the lockdown induced by the pandemic, Mr Khan's two brothers who are daily wage earners had no source of income and therefore needed financial support from him. Despite his strained financial means, Mr Khan, who has three children, decided to ferry patients for free.

Talking about Mr Khan's defiance to take money, Jabeer, one of the people he helped, said, "Javed refused to take money for his services. Even though the auto-rickshaw turned ambulance kept busy, he came in a few minutes after I called him. It was like an ambulance as everything from oxygen cylinder to oximeter was there."