Cops Deployed Outside House Of Woman Who Said "Pakistan Zindabad"

According to sources, a group of people had targeted her house at Gullagadde near Koppal on Thursday evening and window panes were damaged. 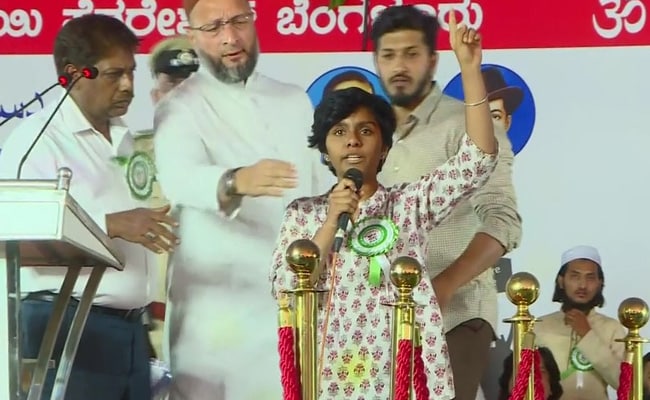 Police have been deployed outside the residence of Amulya Leona, who had raised "Pakistan Zindabad" slogans in Karnataka's Chikkamagaluru district, after an alleged attack by right wing workers, officials said on Friday.

According to sources, a group of people had targeted her house at Gullagadde near Koppal on Thursday evening and window panes were damaged.

Her father Wazi subsequently lodged a complaint following which police personnel were deployed near the house for the family's security.

Amulya Leona had raised "Pakistan Zindabad" slogans thrice after the organisers of the event under the banner of "Save Constitution" invited her to address the gathering in the presence of All India Majlis-e-Ittehadul Muslimeen (AIMIM) chief Asaduddin Owaisi, on Thursday.

After being removed from the stage, she was arrested on charges of sedition and produced before a magistrate court which remanded her to 14 days judicial custody.

A purported Facebook post of Amulya Leona on February 16 has surfaced in which she has said "Zindabad" to several neighbouring countries, and said that doing so does not make her belong to them.

Stating that by saying Zindabad to other countries, she will not belong to that country, Amulya Leona's post says, "As per law, I'm citizen of India, respecting my country and working for the people here is my duty. I will do it, let's see what RSS people do... I have said what I had to, Sanghis start commenting."