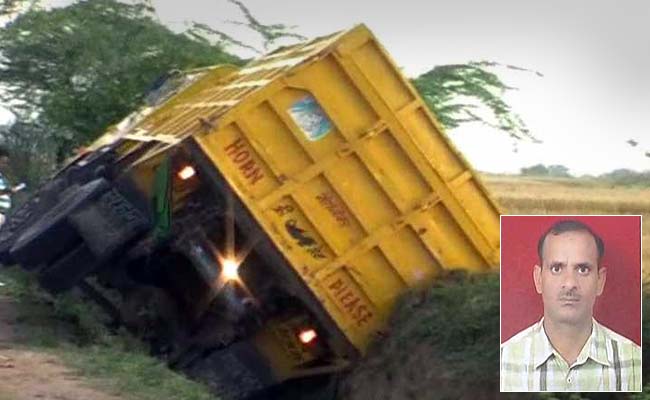 Constable Dharmendra Chouhan who was killed when the driver reversed the dumper at a high speed.

A police constable was killed, in a freak accident, after a driver of a truck laden with illegally mined sand lost control of the wheel, early today morning in Morena, Madhya Pradesh.

According to local police sources Constable Dharmendra Chouhan was part of the police team that had been chasing the truck with illegally mined sand.

They were able to apprehend the truck near Karah Dham, and asked the truck driver to pull up on the side of the road. While reversing, the truck's wheel went into a ditch and it lost control toppling on one side crushing constable Dharmendra Chauhan.

"A team from Noorabad police station, acting on a tip off, was going to a nearby village to catch men who had been accused of a theft. On the way, the truck obstructed the way, police asked the driver to make way, during which the constable was killed," Superintendent of Police, Navneet Bhasin told reporters today.

The constable's body was retrieved from under the dumper and sent for autopsy. The police said that a case has been registered against uknown person for unintentional murder and further investigations are on.

In March 2012, IPS officer Narendra Kumar was mowed down by a tractor allegedly owned by sand mafia in Morena district. A CBI probe was later conducted into the killing and the accused, Manoj Gurjar, was arrested.