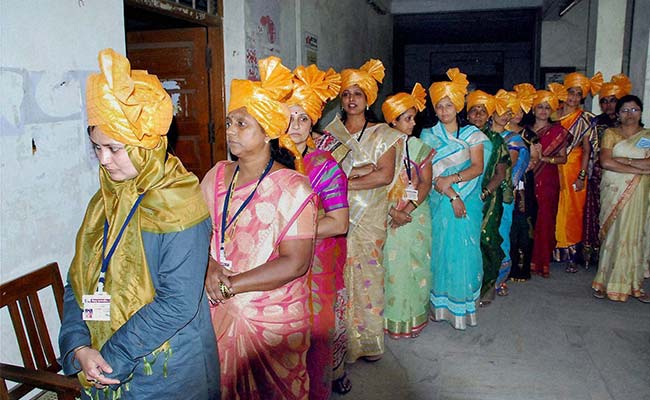 Women voters wearing turban stand in a queue to cast their votes at a polling booth for Legislative Council Election in Kolhapur, Maharashtra on Sunday, December 27, 2015. (Press Trust of India file photo)

Mumbai: Major political parties retained their respective strength in Maharashtra Legislative Council after the recent round of elections to seven local authorities constituencies the results of which were declared today.

The Congress won three seats, Shiv Sena won two, while the NCP, BJP and an Independent bagged one seat each.

The elections to the seven local authorities constituencies of the state Legislative Council were held on Sunday in which 15 candidates were in the fray.

Congress registered victory in one of the three seats (for which elections were held) in Mumbai and in Dhule- Nandurbar and Kolhapur.

The Shiv Sena won a seat each in Mumbai and Akola-Washim- Buldhana, while the BJP bagged Nagpur MLC seat.

Mr Jagtap was facing a stiff challenge from former NCP leader and Independent candidate Prasad Lad, amid reports that a faction of about 20 Congress corporators cross-voted.

The Sena and BJP together have 119 corporators in the house of 230 members in the Mumbai civic body, of which 201 actually cast their vote during the elections held on December 27, while the others abstained.

In Nagpur, BJP's Girish Vyas was declared elected unopposed as there was no rival in the fray.

In Ahmednagar, sitting NCP MLC Arun Jagtap won by securing 243 votes. He was locked in a four-cornered contest with Congress's Jayant Sasane, who filed the nomination as a rebel candidate, and Shiv Sena's Shashikant Gade and the independent candidate Machindra Supekar.

In Akola-Washim-Buldhana, there was a straight contest between sitting Sena MLC Gopikisan Bajoriya and NCP's Ravindra Sapkal. Bajoriya, who polled 513 votes, defeated Sapkal at the seat.

Independent candidate Prashant Paricharak, who was supported by the BJP, won in Solapur by securing 261 votes.

Out of the total 2,622 corporators, 2,585 cast their ballot, with the overall 98.59 per cent voting being recorded.
Comments
Maharashtra Council pollsCongressShiv SenaMaharashtra Legislative CouncilRamdas KadamBhai Jagtap