The Congress has alleged that the Modi government has led to a loss of over Rs 41,000 crore to the exchequer by paying a higher price for the aircraft than what was negotiated by the UPA. 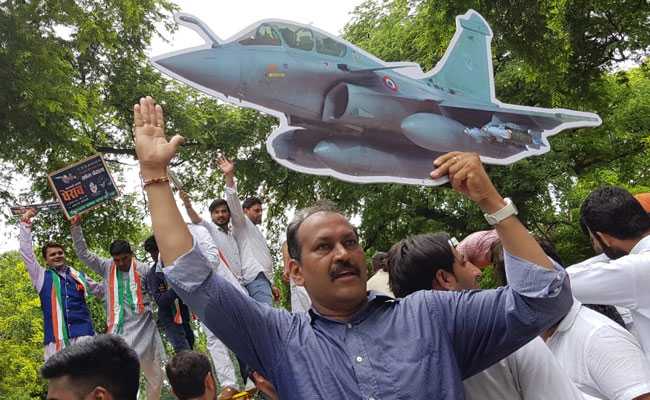 The Congress has asked why the centre was not setting up a joint parliamentary committee on Rafale deal.

To escalate its all-out assault on the Narendra Modi government over the Rafale deal, the Congress will raise the issue with the Comptroller and Auditor General of India or CAG, the government's auditor, on Wednesday and demand a thorough probe into the controversial fighter jet contract, party sources said.

The Congress has alleged corruption in the deal to buy 36 Rafale fighter jets from France's Dassault Aviation.

It has alleged that the Modi government has led to a loss of over Rs 41,000 crore to the exchequer by paying a higher price for the aircraft than what was negotiated by the UPA.

Earlier in the day, former Defence Minister and senior Congress leader A K Antony accused Defence Minister Nirmala Sitharaman of "suppressing facts" on the Rafale deal. With him, Congress chief spokesperson Randeep Surjewala said the CAG and the Central Vigilance Commission (CVC) are bound by their constitutional duty to look at the entire deal and all its papers - whether or not somebody moves them.

"Congress Party at an appropriate time also intends to move an appropriate petition before CVC and CAG to expeditiously and quickly adhere to their constitutional duties," Mr Surjewala said.

The Congress has asked why the government was not setting up a joint parliamentary committee to probe the fighter jet deal.

Defence Minister Nirmala Sitharaman, however, rejected the demand saying all the details on it have already been placed before Parliament. She, however, did not give any direct reply on Mr Antony's charge on why the NDA did not buy more aircraft if its price was cheaper.

"The UPA (Congress-led United Progressive Alliance) did not care for either the Indian Air Force or the HAL (Hindustan Aeronautics Limited). To say that we are not taking care of HAL is totally incorrect," Ms Sitharaman said, refuting a Congress charge that the government had given the contract to a private company over the state-run HAL.