Congress Should Have Aligned With Trinamool In Bengal: Veerappa Moily 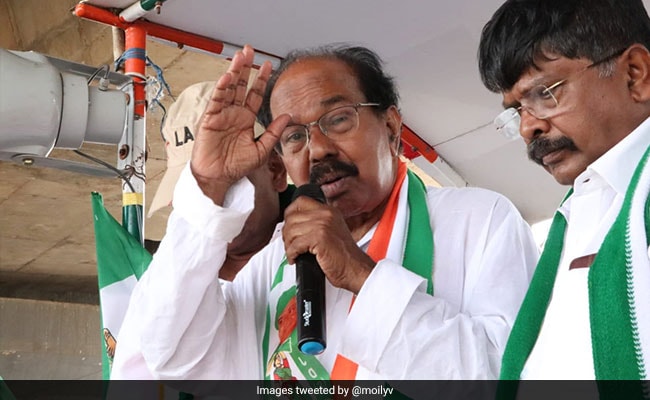 Senior Congress leader M Veerappa Moily today said his party should have struck an alliance with Mamata Banerjee's Trinamool Congress in the recent West Bengal elections, even as he expressed anguish over "ad-hocism" in the grand old outfit.

The former Union Minister also sought action against West Bengal Pradesh Congress Committee President Adhir Ranjan Chowdhury for the poll debacle in the state, describing him as a "weak leader with no grass-root touch".

Mr Moily cited wrong selection of alliance for the "wipe-out" of the party in the state, where it had aligned with the Left and the Indian Secular Front.

Referring to Ms Banerjee as "our lady" -- she was with the Congress before floating TMC -- he said his party could have had "better liaison" with her despite the fact that "she may have taken our MLAs (earlier)".

"When she is fighting against the BJP, our right partner would have been Mamata", Mr Moily, a former Karnataka Chief Minister, said.

Attacking Mr Choudhury, Mr Moily said he has no "grass-root touch" and is "credited as a leader only for using abusive words against Mamata Banerjee.

"That was not appreciated by people and our cadre. Even our own voters shifted away to Mamata in our strongholds where traditionally Congress used to get elected", he said.

"And the man (Adhir Ranjan Choudhury) is not punished. He continues to be PCC president, and leader of Congress in Lok Sabha. Who will care for the party if you don't take action and make them accountable?", Mr Moily asked.

He was also unsparing in criticism of his party over election strategy, made a strong pitch for developing regional leadership and indicated that failure to project Chief Ministerial candidates in Assembly elections in Assam and Kerala cost the Congress dearly.

Making no secret of his displeasure, Mr Moily said the Congress tends to make the same mistakes in selection of candidates in elections.

"We select our leaders in various States depending on their ability to raising cash (resources) and capable of mobilising their respective caste. I don't think the Congress can win elections like this," he said.

Mr Moily was of the view that people no longer vote for a party looking at its central leadership; they want to know their Chief Ministerial candidate.

In Kerala elections for example, the Congress was confused about selection of Chief Ministerial face and people backed Pinarayi Vijayan again, according to him.

Also in Assam, the Congress did not project any Chief Ministerial face.

In Tamil Nadu, the Congress jumps for one alliance to another (with DMK) but makes no effort to strengthen the party organisation after elections, he said.

The Congress "threw away" too many seats to its alliance partner DMK in Puducherry, where that party had "not much presence".

On Assembly election setbacks in West Bengal, Assam, Tamil Nadu, Kerala and Puducherry, Mr Moily said somebody should be made accountable at the AICC and State levels.

"Election management machinery.. right from AICC to both level.. is not done in Congress. Everything is done with ad-hocism", he lamented.

On lessons that the Congress should learn from the poll debacles, Moily said the party has to be revamped from the booth to top level.

"Ad-hocism will not take you anywhere.. facing a strong ruling party like the BJP. And we have to strengthen regional leadership", he suggested.