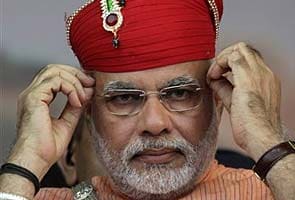 Ahmedabad: The Congress has intensified its attack on Gujarat Chief Minister Narendra Modi ahead of the state assembly polls. Mr Modi came under a sharp attack from Congress leaders, including Mani Shankar Aiyer who compared him with demon king 'Ravana' and also called him 'asatya ka saudagar' (merchant of falsehood) on Saturday.

"Modi has engaged a world renowned PR agency and is paying a hefty sum to it to build his image at the cost of tax payers of the state. That is the reason this image of lohpurush (iron man). What lohpurush... he is just a pani purush (man like water)," Congress leader Mani Shakar Aiyer said at a meeting in Porbander on Saturday.

Congress chief Sonia Gandhi had in the run up to the previous assembly poll in Gujarat had described as "maut ka saudagar" (merchant of death) in the wake of 2002 post-Godhra communal riots.

BJP MP Vijay Rupani said Congress should mind its own house as it is not getting candidates to fight against Modi from Maninagar seat which he had won last time with a margin of over 75,000 votes.

Aiyer said it is time to end the rule of 'Ravana' in the state and asked the people to celebrate "real Diwali" on December 20 (counting day).

At the same meeting, Congress spokesperson Rashid Alvi said Congress would provide an honest and a young chief minister if the party comes to power in the state.

Congress general secretary and MP Oscar Fernandez, speaking at a function in Bajipura in Tapi district of South Gujarat, said "two Gandhis are famous in the country. One is Mahatma Gandhi and other is Rahul Gandhi. Like Mahatma Gandhi who had toured the country before taking up fight for independence, Rahul Gandhi is also going to the houses of poor and Dalits spending nights there and eating with them".

Two Congress leaders, namely, Minister of State for Power, Jyotiraditya Scindia and MP Priya Dutt could not come to address rallies in Godhra and Dahod respectively.

The party will be holding 10 more rallies in different parts of the state tomorrow as well.