Accusing the Congress and "Urban Naxals" of spreading lies, PM Modi had said that there were no detention centres for illegal migrants in the country. 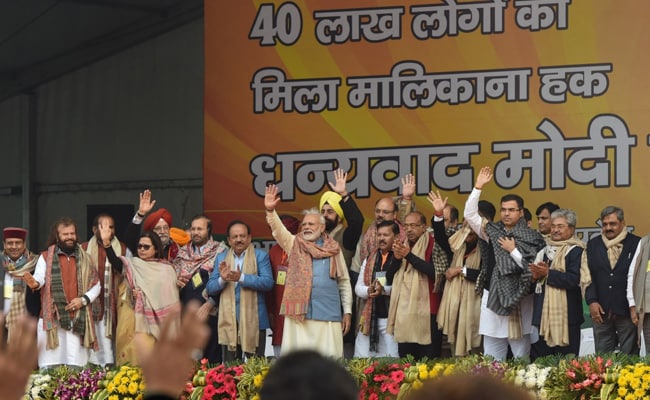 PM Modi said Indian Muslims have no reason to fear the amended Citizenship Act or NRC.

Shortly after Prime Minister Narendra Modi declared at an election rally in the national capital on Sunday that "there are no detention centres in India", the Congress struck back by saying that it wouldn't take anything more than a simple Internet search to expose his claim.

"Does PM Modi believe Indians can't do a simple Google search to fact-check his lies? The detention centres are extremely real and will continue to grow as long as this government is in power," the opposition party posted through its Twitter handle.

Attached to the tweet were three newspaper reports, one of which quoted Union Minister Nityanand Rai as saying that 28 illegal migrants had died in detention centres across Assam.

Does PM Modi believe Indians can't do a simple google search to fact check his lies?

Detention Centres are extremely real and will continue to grow as long as this govt is in power. https://t.co/S8caIH6u6Jpic.twitter.com/APl4JNfQgc

Addressing a massive rally at Ramlila Maidan, PM Modi accused the Congress of orchestrating the ongoing protests against the Citizenship Amendment Act by spreading "rumours" that the law was just the first step towards depriving Muslims of their citizenship and sending them to detention centres. "No Muslim is being sent to detention centres, nor are there any detention centres in India. I am shocked at the lengths some people can go to spread lies," he said.

The Prime Minister claimed that "Urban Naxals and opposition parties" had launched a campaign of misinformation against the amended citizenship law because they were unhappy about him winning the Lok Sabha polls two times in a row. He also said that the National Register of Citizens (NRC) was implemented in Assam under the Supreme Court's directions, and virtually denied the possibility of a nationwide exercise of the kind by saying that "there has been no discussion on the matter" since he came to power in 2014.

Congress leader Anand Sharma contested this claim by saying that Union Home Minister Amit Shah had himself spoken on the government's strategy on various forums. "The Home Minister said this in both the houses, it's now in public domain. There is an environment of fear, insecurity and uncertainty in the country, and the government is primarily responsible for that," he said.

One such instance Mr Sharma was referring to was a speech by Amit Shah in West Bengal's Bongaon a few months ago, where he said that the centre will first pass the Citizenship Amendment Bill to ensure that all "eligible" refugees from neighbouring nations get Indian citizenship and then follow it up with a nationwide NRC to deport every "infiltrator" from India.

West Bengal Chief Minister Mamata Banerjee also pointed at alleged contradictions in PM Modi's speech. "Whatever I said is there in public forum, whatever you said is there for people to judge. With our PM contradicting the Home Minister publicly on Nationwide NRC, who is dividing the fundamental idea of India? People will definitely decide who is right and who is wrong," she tweeted.

Several media publications have reported that the government is constructing a mass detection centre that is the size of seven football fields with a capacity of 3,000 people in Assam's Goalpara district. Reports have also emerged of an upcoming detention centre at Nelamangala in Karnataka's Bengaluru Rural district and another in Navi Mumbai.