Addressing a rally in Bongaon Lok Sabha constituency, Mr Shah said his party will continue its fight to ensure that Kashmir remains an integral part of India, no matter who is in power at the centre. 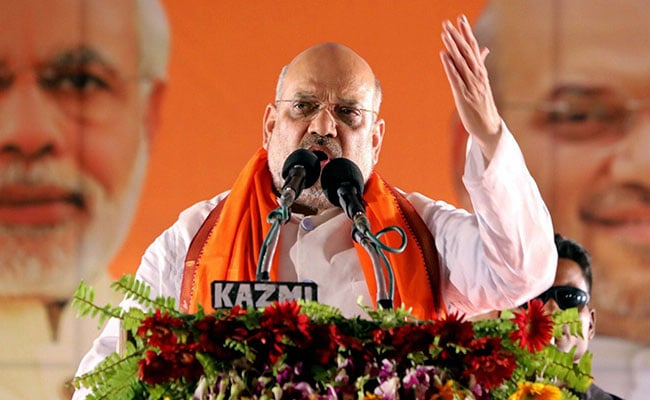 Amit Shah also claimed that lawlessness has increased in the state. (File)

Stepping up his attack on Mamata Banerjee, BJP president Amit Shah said on Wednesday that the West Bengal chief minister has extended her support to those who wish to divide the country by separating Kashmir from India.

Addressing a rally in Bongaon Lok Sabha constituency, Mr Shah said his party will continue its fight to ensure that Kashmir remains an integral part of India, no matter who is in power at the centre.

"Today we are in power, Narendra Modi is the prime minister. In the coming days, too, he will continue as the PM. But if a day comes when the BJP is no longer at the helm, its workers will still fight to ensure that Kashmir remains an integral part of India," he said.

He iterated that the BJP, if re-elected to power, will scrap Article 370 of the Constitution in Kashmir which grants special status to the northernmost state.

"Give us 30 seats from Bengal and we will scrap Article 370 from Kashmir after forming the next BJP government at the Centre," Mr Shah claimed.

"Mamata didi is supporting those who wish to divide India. We want to know what she has to say on Omar Abdullah's demand for two prime ministers in the country," he said.

Referring to infiltrators as "termites", who are eating into the country's resources, Mr Shah asserted that his party will throw them out after coming to power at the Centre for a second term.

"They are termites, they are eating into the country's resources," he asserted.

The Bongaon Lok Sabha seat has a sizeable Matua population that had migrated to West Bengal from Bangladesh in the 1950s, mostly due to religious persecution.

With an estimated population of 30 lakh in the state, the community can influence poll results in at least five Lok Sabha seats in Bengal.

Mr Shah also claimed that lawlessness has increased in the state, with the Trinamool Congress (TMC) dispensation letting loose goons to run its syndicates.

In West Bengal, ''syndicate'' refers to a group of businessmen, backed by the ruling party, operating mainly in those areas of the state that are witnessing a realty boom.

The state, which was once known for its rich culture, is now a hub of "bomb and illegal gun-making factories", he maintained.

"Other than bomb manufacturing units, no factory has been set up in the state under the Mamata Banerjee government.

"The sound of bomb explosions has silenced Rabindra sangeet in Bengal. Under the TMC rule, all three - mother, motherland and people (TMC slogan of maa, mati, manush) - are suffering," he added.