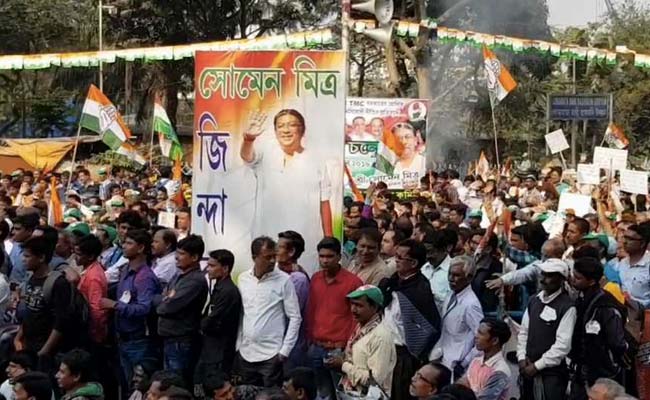 Hundreds of Congress workers gathered to celebrate the party's victories in the Hindi heartland.

The Congress victory in the Hindi heartland is shaking things up in distant Bengal. At a celebratory rally in Kolkata, an unexpectedly large turnout prompted one Congress leader after the other to attack the ruling Trinamool Congress and its leader, Mamata Banerjee, alleging violence by her cadre against Congress workers in Bengal and attempts to cosy up to the high command in Delhi.

"There is no vacancy in Delhi for anyone but Rahul Gandhi," said Adhir Ranjan Chowdhury, Congress MP. "Mamata Banerjee is suffering from tension as Rahul Gandhi is reigning supreme in opposition politics. In 2019, Congress will capture Delhi. Thereafter, Bengal."

Chowdhury told the rally: "If winter comes, can spring be far behind?"

His supporters said the allusion was to Mamata Banerjee's angry reaction to a Rahul Gandhi visit some years ago when she had called him "basanter kokil" or a cuckoo that only comes in spring or infrequently. Chowdhury is a known Mamata baiter and had even gone to court to protest alleged violence by the Trinamool during panchayat polls earlier this year. He was then the state Congress chief, a post he lost two months ago.

His successor, Somen Mitra, almost echoed his words. "Our straight line from the grassroots Congress workers is, we should fight the 2019 elections alone," he said.

"We also have prospects, we are not a lost case, we can return in Bengal. The way the AICC (All India Congress Committee) is supporting us, we will be back," he said, adding, "Trinamool came to power with our support. They defeated Left Front only with our strength. Trinamool should not forget that."

Trinamool leaders contacted for reactions to the Congress comments did not respond till reports last came in.

Among the speakers at the rally was Gaurav Gogoi, Congress observer for Bengal. He spoke of the violence Congressmen had to suffer in Bengal during the recent panchayat polls allegedly at the hands of the Trinamool. "Our state leaders are also talking about the fact that while every opposition leader congratulated our president for yesterday's results, there was no mention of him or the party on the chief minister's Twitter handle," he added.

The West Bengal chief minister did put out three tweets on the results yesterday. But not once was the Congress or Rahul Gandhi mentioned in them by name.

Ms Banerjee's tweets read: "People voted against BJP. This is the people's verdict and victory of the people of this country. Victory of democracy and victory against injustice, atrocities, destruction of institutions, misuse of agencies, no work for poor people, farmers, youth, Dalits, SC, ST, OBC, minorities and general caste. Semifinal proves that BJP is nowhere in all the states. This is a real democratic indication of 2019 final match. Ultimately, people are always the 'man of the match' of democracy. My congrats to the winners."

Congress MP Mausam Benazir Noor from Malda North was non-committal on a tie-up with the Trinamool in Bengal for the 2019 polls. "The high command will decide," she said.