"Congress Firm In Commitment To Stand By Farmers On MSP": Sonia Gandhi

In a speech packed with pointed attacks at the Modi government, Mrs Gandhi also expressed her dismay at "the outrageous" suspension of 12 opposition MPs 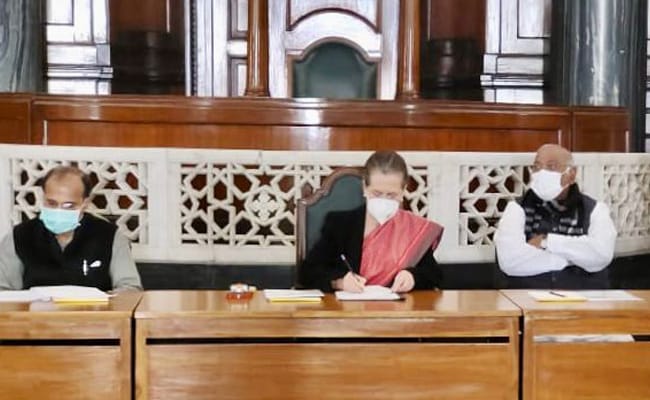 Sonia Gandhi came down heavily on the government this morning at the Congress' parliamentary party meeting, underlining her party's support for farmers demanding legal guarantee for MSP and compensation for the families of those who died during the farm laws protests.

Notably, though, Mrs Gandhi failed to touch upon the party's plans for the raft of Assembly elections due next year, including in the politically key state of Uttar Pradesh and in Punjab, where the Congress government is scrambling to retain power after explosive comments by Navjot Sidhu.

Mrs Gandhi, who said the Congress was firm in its commitment to farmers, slammed the ruling BJP for failing to ensure prices (at which agricultural products are sold) that meet costs of cultivation. She said her party would push for a Parliament debate on the challenges facing the agri-sector.

"We are firm in our commitment to stand by farmers in their demands for legally-guaranteed MSP, remunerative prices that meet costs of cultivation, and compensation to the bereaved families," the interim Congress chief said, as she offered praise for the thousands of farmers whose "discipline and dedication" over the past 15 months had forced the government to withdraw the three farm laws.

Prime Minister Narendra Modi last month offered an "apology" and said the farm laws would be scrapped (they were repealed a few days later). The farmers, however, remain in protest mode over other unfulfilled demands, including a legal backing for MSP, or minimum support price.

In a yet another sign of the sustained pressure exerted by the farmers, the government yesterday said it was ready to offer a written guarantee that a guarantee for MSP will be fully considered.

Farmer leaders are meeting in Delhi this morning to consider the offer; if it is accepted, they will stand down their protest, which includes pulling back from camps set up around the national capital.

In a speech packed with pointed attacks at the Modi government, Mrs Gandhi also expressed her dismay at "the outrageous" suspension of 12 opposition MPs, six of whom are from the Congress.

"The outrageous suspension of 12 opposition Rajya Sabha MPs for the entire winter session is unprecedented... It violates the Constitution and the Rules (of the Upper House)," she said.

Meanwhile, during her address today, Mrs Gandhi also ripped into the government for skyrocketing prices of essential goods, including edible oils, fuel and vegetables, all of which have seen worrying spikes over the past weeks.

"I cannot understand how and why the Modi government is so insensitive. It seems impervious to the suffering of the people. The steps it has recently taken to reduce petrol, diesel, and cooking gas prices are totally insufficient and inadequate," she said.

Mrs Gandhi underlined the fact that there were "many other issues we want to raise" and criticising the government for giving the opposition "no opportunity whatsoever" to hold debates on any topic.

She concluded by expressing a "collective sense of deep anguish" over the deaths of 14 civilians in Nagaland on Saturday and Sunday, in an Army op that went horribly wrong.

"The government expressing regret is not enough! Justice for the families of the victims has to be ensured," she said, referring to Home Minister Amit Shah's perfunctory speech this week.