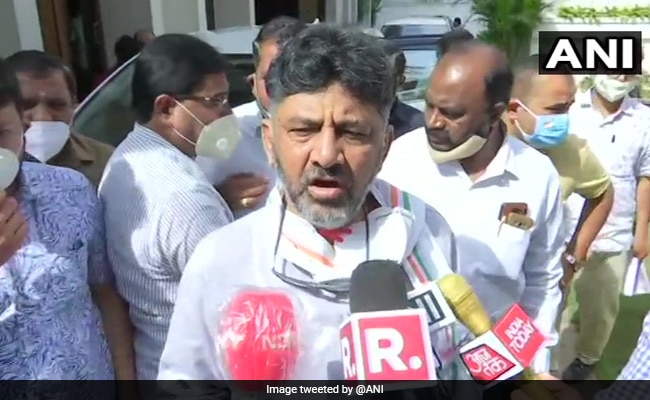 Karnataka Congress president DK Shivakumar will not appear before the Enforcement Directorate (ED) tomorrow after the central agency rejected his plea for exemption from appearance for questioning. The central agency is probing into charges of money laundering over the operations of Congress party-owned National Herald newspaper.

"I had requested for time to appear before the ED, which has been denied. I will take a call on whether to appear before the agency after talking to my leaders," the Congress leader had said earlier. However, according to sources, he will not attend tomorrow's questioning by ED.

Congress party's 'Bharat Jodo Yatra', led by its leader Rahul Gandhi, entered Karnataka on September 30 and will be in the state for 21 days. Mr Shivakumar is actively involved in the conduct of the Karnataka leg of the march and had requested ED to allow him exemption from appearing before it until October 21.

In a fresh message to Mr Shivakumar, the ED had told him to make himself available before the agency tomorrow. "You are once again directed to present yourself before me at my office for recording of your statement on October 7, 2022, as per summons dated September 23, 2022," an email sent by ED Assistant Director Kuldeep Singh said.

The former Karnataka Cabinet minister was questioned by ED on September 19 in New Delhi in the National Herald case. Five Telangana Congress leaders were also summoned by the central agency over alleged donations to the newspaper.

Properties belonging to Mr Shivakumar in parts of Karnataka were verified by the Central Bureau of Investigation late last month. The agency, which is investigating the leader in connection with an alleged money laundering and a disproportionate assets case, looked into the documents linked to the properties.

Since 2017, Mr Shivakumar is also being investigated by the Income Tax Department. Property belonging to him was seized after a series of searches in Bengaluru and other places.