Hardik Patel, the face of the Patel or Patidar agitation for reservation in government jobs and colleges, was the first to visit Vishwa Hindu Parishad leader Pravin Togadia at the Chandramini Hospital this morning. 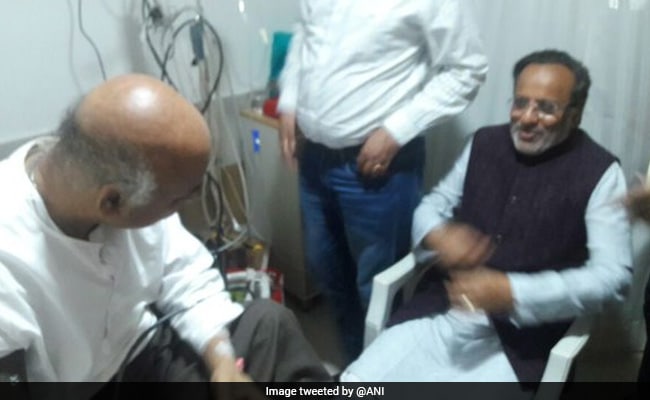 Ahmedabad: Pravin Togadia, the VHP leader who briefly went missing on Monday, had visitors today at the Ahmedabad hospital where he is admitted, among them activist Hardik Patel and senior Gujarat Congress leader Arjun Modhwadia.

Mr Modhwadia explained his meeting Mr Togadia, a leader of the right-wing Vishwas Hindu Parishad and seen as a Hindutva hardliner, saying, "it was in my personal capacity. He has raised issues about threat of fake encounter. There have been instances like Haren Pandya... the Judge Loya case and other incidents. Just wanted to hear his version. He may be an ideological opponent but he has been targeted by his own people."

It was an attack on the BJP. The VHP, like the BJP, is an affiliate of the Rashtriya Swayamsevak Sangh or RSS, but 62-year-old Mr Togadia has for years not been on best of terms with Prime Minister Narendra Modi, who was Chief Minister of Gujarat for 13 years before he led the BJP to a big victory in the 2014 national election and moved to the centre.

The visits today were quickly seen in the context of what has been called the Congress' soft Hindutva agenda in last month's assembly elections in Gujarat. It saw party chief Rahul Gandhi visiting temples as he campaigned and the ruling BJP accused him of trying to draw Hindu votes in the state. The BJP won its fifth straight term in the state, but by the skin of its teeth, and the Congress improved its performance considerably.

Hardik Patel, the face of the Patel or Patidar agitation for reservation in government jobs and colleges, was the first to visit Pravin Togadia at the Chandramini Hospital this morning. "I have known him for a long time. There may be ideological differences but even he has been raising issues of community, farmers, poor section," he said. Mr Patel was at 24 too young to contest the assembly elections last month, but partnered with the Congress addressing big rallies to urge his influential community to punish the BJP for not including Patels among groups that benefit from affirmative action.

Pravin Togadia went missing yesterday after the Rajasthan Police arrived in Gujarat to arrest him in a ten-year old case and was later found admitted in a hospital; he was reportedly taken there after being found unconscious in a park. Doctors today said he is stable.

A tearful Mr Togadia said today that he went into hiding as he feared a plot by the police to kill him in an encounter. He alleged that "some people" are trying to stifle his voice and that he is not being allowed to speak on issues like the Ram Temple, farmers and cow slaughter. He also said that he will surrender before court in Rajasthan after he is discharged from hospital.

The Congress's Sanjay Nirupam has demanded a probe into the VHP leader's allegation, saying though his party has "ideological differences" with Mr Togadia, it sympathises with him "on humanitarian grounds."

Promoted
Listen to the latest songs, only on JioSaavn.com
"Now his life is in danger. What can be the reason? How can a person with Z Plus security go missing for 12 hours and be found in an unconscious state in a park?" Mr Nirupam said.

VHP workers took the streets yesterday and halted traffic as they held demonstrations after their leader went missing.