Read inOther Languages
This Article is From Jul 30, 2018

The understanding between the parties in the nation's largest state is crucial to the building of an opposition front to take on the BJP in next year's general elections. 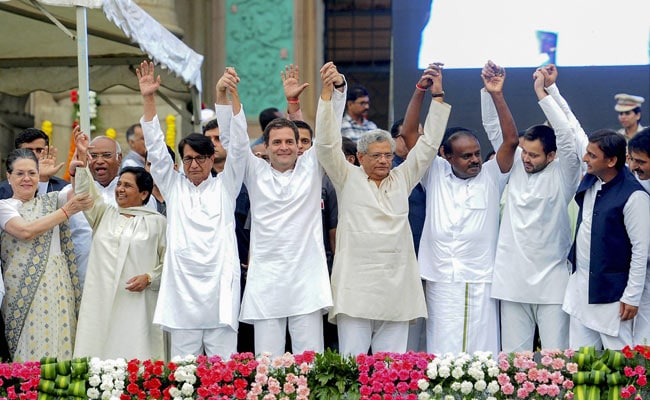 Congress has finalised its alliances for Jharkhand, Maharashtra, Bihar, Tamil Nadu and Kerala

A broad agreement has been worked out between the Congress, Akhilesh Yadav's Samajwadi Party, Dalit powerhouse Mayawati and RLD leader Ajit Singh to take on the BJP in Uttar Pradesh, the state that sends the maximum number of parliamentarians to the Lok Sabha. Sources said the parties have decided to work out the details of sharing the state's 80 seats later.

The understanding between the parties in the nation's largest state is crucial to the building of an opposition front to take on the BJP in next year's general elections. The idea of a common front in Uttar Pradesh paid dividends in by-elections held in the state earlier this year - delivering to the opposition the high-profile seats of Gorakhpur and Phulpur, and later Kairana and Noorpur.

Seat-sharing between Mayawati and the Congress has hit a roadblock in Madhya Pradesh over the BSP chief's demand for 50 of the state's 230 seats. Sources in the Congress say the party has offered her 22 and has refused to go beyond 30.

"It has to be a formidable alliance to take on the BJP and not one that would ensure a revolt in both parties and help the BJP," a leader said.

In Uttar Pradesh, Congress sources say the alliance is work in progress.

The BSP and the Samajwadi Party have a broad understanding, under which Ajit Singh's party will be given seats from the SP quota.

Sources say the parties are ready to give the Congress eight of 80 parliamentary seats in Uttar Pradesh. "Unless there are tough negotiations, we will not agree to more than 10. The BSP will be given the maximum seats and the SP will be contesting approximately on 32. Three seats will go to the RLD," a leader said.

The Congress has already finalised its alliances for Jharkhand, Maharashtra, Bihar, Tamil Nadu and Kerala.

For Jharkhand and Tamil Nadu, it has worked out a seat-sharing formula with local heavyweights JMM and M Karunanidhi's DMK. The alliance in Tamil Nadu also includes the Left, which has agreed to work with the Congress in and outside parliament.

In Bihar, Congress' 'Grand Alliance' with Lalu Yadav stands, strengthened by the defection of Nitish Kumar to the BJP.

In Maharashtra, the Congress has already worked out a seat-sharing formula with Sharad Pawar. Several smaller parties are also expected to be part of the alliance.