On Gujarat Dalits, Others Target Centre, But Mayawati Lays Into Congress

Mayawati hits out at Congress over Dalit attacks in Gujarat, says it does little as main opposition party

New Delhi: The suicide attempts by 12 young Dalit men in Gujarat, combined with violent protests against the government across the state, have forged a united attack on the Centre by opposition parties.

Opposition leaders ranging from Sonia Gandhi to Mamata Banerjee - she described the attack on Dalit men by cow protection vigilantes in Gujarat as "organized crime" - condemned the government for promoting an ideology that is polarizing.

But Mayawati, who heads the BSP, the powerful Uttar Pradesh party whose biggest supporters are Dalits, expended much of her criticism for the Congress, who, she said, has once again failed in its responsibilities as the main opposition party.  Uttar Pradesh votes soon for its next government, and Mayawati is hoping to displace arch rival Samajwadi Party to return as Chief Minister.
In Gujarat, she said, the Congress "was asleep at the wheel" over this week's attack on four young Dalit men by cow vigilantes in the town of Una who alleged a cow had been killed and not skinned, as the victims claimed. The thrashing of those men on July 12, caught in a video that has gone viral, has triggered more than 10 suicide attempts by Dalits and arson attacks with state buses and a telephone exchange being set on fire.
Attacking the party's Vice-President, she also said Rahul Gandhi "was sleeping in the House while a debate on the issue was on." During the discussion, Mr Gandhi was seen sitting in the Lok Sabha with his eyes closed. 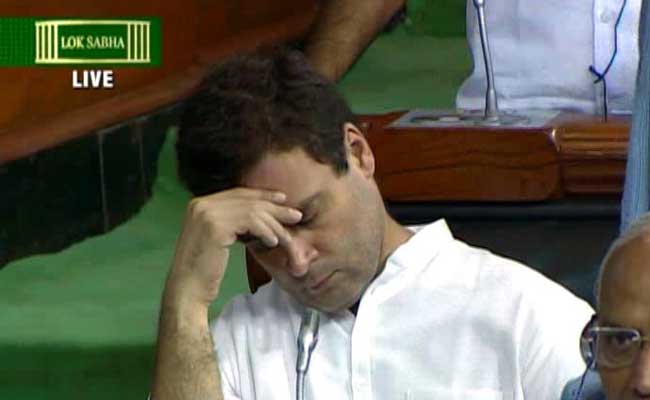 The Congress is the big opposition party," Mayawati said, adding "why didn't they react earlier in Gujarat?" She said the party was now following her cue in demanding justice for Dalits, new evidence, she claimed, of the Congress' naatak-baazi (theatrics).  The Congress was all talk and little action, she said, even in January, when Dalit student Rohith Vemula killed himself at his university in Hyderabad.

Mr Vemula's hanging, preceded by a despairing note to university officials in which he alleged persecution on account of his caste, led to campus protests across the country.