4 men were stripped and beaten over suspicion of cow killing in Gujarat's Una town last week.

Rajkot: Confined to a creaky hospital bed in Rajkot for a week now, 23-year-old Veshram Sarvaya has been unable to reason exactly why he ended up here.

Veshram was among the four men who were stripped, tied to a car and thrashed by a cow vigilante group in Gujarat last Monday about 400 km from Ahmedabad.

The men who live in the Moti Samadiyala village in Gir-Somnath district and work in a tannery had got a call from a farmer of adjoining Bedia village asking them to collect the dead cow.

They picked up the carcass and had just started skinning the animal on the outskirts of the village when the vigilantes arrived.

"They said 'you are slaughtering a cow'. We pleaded that we are just taking the skin off a dead cow. Our forefathers have been in this trade and its legal. But they wouldn't listen. They snatched our cellphones and started beating us up with rods and sharp edged weapons," said Veshram.

Even as they pleaded for mercy, the men were chained to a car, thrashed and paraded half-naked before being handed over to police. 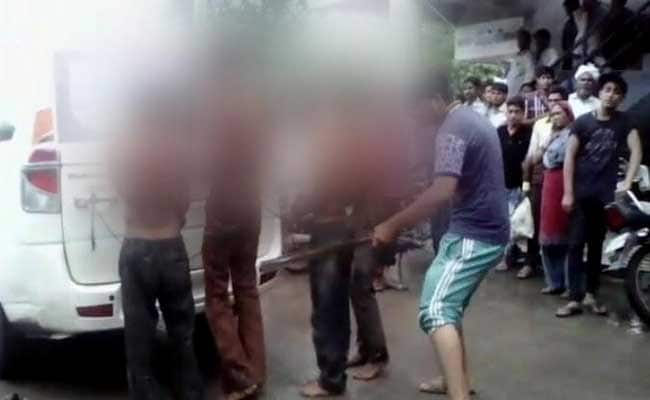 The men were stripped and beaten up on suspicion that they had slaughtered a cow.

The men claimed the police did little to prevent vigilantes from brutal attack and in fact detained them for several hours.

Another victim, 23-year-old Chehrabhai Sarvaiya, lying in the hospital bed, is frightened for his life and is considering quitting his profession. He said he would now ignore any calls from villagers to take away their dead cattle.

"Let them hand over the dead animals now to Gau Raskha squads. We will have nothing to do with it," said Chehrabhai.

While the men remain confined to a hospital, recovering from their injuries, politics over the attack raged outside.

In Amreli town of Saurashtra, protesters clashed with the police, resulting in the death of a constable. In Rajkot and Jamnagar, protesters hurled rocks at Gujarat state transport buses.

Already reeling under the impact of the Patel quota agitation and facing an election challenge next year, a worried Anandiben Patel government has announced a Criminal Investigation Department probe and six policemen including an inspector have been suspended.

The Chief Minister even promised a fast track court for trying the eight accused who were arrested in the case.