State Congress president Sachin Pilot pointed out that despite the High Court ruling the Public Works Department in Pindwara-Abu has invited tenders. 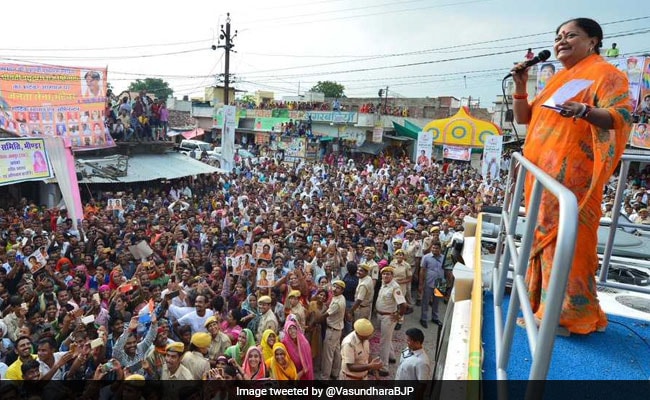 State HC has asked BJP to submit an affidavit of expenses incurred on the ongoing Gaurav Yatra.

The Congress in Rajasthan has demanded suspension of the ongoing state-wide Gaurav Yatra by Chief Minister Vasundhara Raje alleging misuse of government machinery.

Rajasthan Pradesh Congress Committee president Sachin Pilot today said that despite the High Court objecting to government machinery being misused for the yatra, the Public Works Department in Pindwara-Abu has yet again invited tenders for yatra arrangements.

"It amounts to insulting the judiciary," said Mr Pilot.

"The Rajasthan High Court has admitted a PIL challenging the misuse of government machinery in organising the yatra. But PWD officials on Aug 18 again invited tenders for making arrangements, which is a complete violation of the court''s observations," he added.

"This also shows that the state government has no respect for the taxpayer's money," he added.

"The chief secretary should direct all collectors and officials to stop participating in any way in this party-specific event," Mr Gehlot said.

The Rajasthan High Court on Saturday asked the ruling BJP to submit an affidavit with details of expenses incurred on the ongoing Gaurav Yatra.

The court fixed Aug 21 as the next date of hearing, asking party officials to come prepared with documents.