The state will go to polls in two phases on November 12 and November 20 and counting of votes will take place on December 11. 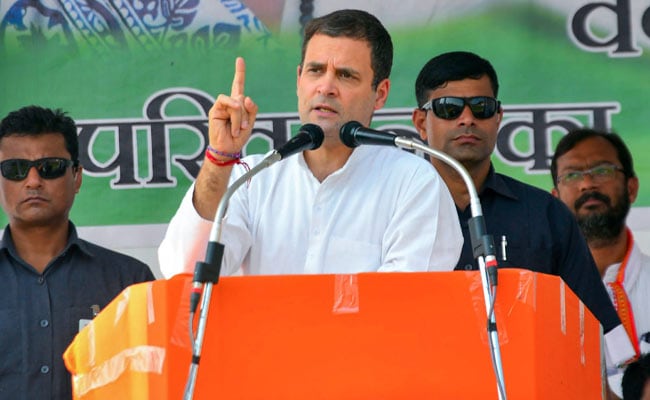 Rahul Gandhi is in Chhattisgarh for two-day visit.

Congress chief Rahul Gandhi on Friday released the party's manifesto for Chhattisgarh which promises farm loan waiver, minimum support price for crops as per the Swaminathan Commission recommendations and ban on liquor sales.

The state will go to polls in two phases on November 12 and November 20 and counting of votes will take place on December 11.

Mr Gandhi released the manifesto, titled "Jan Ghoshna Patra" in Rajnandgaon, which is the constituency of Chief Minister Raman Singh.

Addressing a press conference on the occasion, Mr Gandhi said that farmers' loans would be waived within 10 days of the party attaining power.

Besides, a provision of pension for farmers aged above 60 years has also been planned, the Congress chief said.

Every family will be given 35 kg of rice every month at Re 1 only, he said.

It also promised a monthly stipend to 10 lakh unemployed youths under the party's 'Rajiv Mitr Yojana".

The manifesto mentioned the setting up of special women's police stations, women help cells in police stations and strict enforcement of laws related to women.

A special conveyance for women for late night commuting has also been proposed in the manifesto.

Emphasising on health care services, the manifesto proposes introduction of a "universal health care" scheme in which free and quality services will be provided to those in need.

It also proposes converting six medical colleges into multi-speciality hospitals, along with bringing 1,000 specialists on board in the first year.

Air ambulances will be provisioned for areas like Bastar, Sarguja and Gariaband's Supebeda, Gandhi said.

Special attention on improving the quality of education through emphasis on quality of teachers has also been listed in the manifesto.

The manifesto also promises an increase in the minimum support price (MSP) on 70-85forest crops, and fixing Rs 4,000 per bag for 'tendu patta' workers.

It speaks about fixing a "respectable income" for daily wage labourers, increase in income bands of Class 3 and 4 employees and distribution of 7th Pay Commission surplus in three phases.

It also promises increase in the pension being given to police families who have lost a family member in Maoist attacks.

The Congress manifesto speaks about the establishment of sports hostels and scholarships for economically weak sports persons.

The manifesto promises a ban on sale of liquor in the state, adding that Gram Sabhas in Scheduled areas like Surguja and Bastar will be vested with the power to decide on such a ban in these places.

A policy will be drafted to take on the menace of Maoism and serious steps will be taken for talks, Mr Gandhi said, adding that each Naxal-affected panchayat will be given a package of Rs 1 crore for community development works.

Special laws will be enacted to ensure protection to journalists, lawyers and doctors, he added.

In forest areas like Lemru and Korba, elephant and wildlife sanctuaries will be set up and steps would be taken to reduce human-elephant conflict, Gandhi added.

Mr Gandhi on Friday held a road show in Rajnandgaon town and addressed three poll rallies in Pakhanjore (Kanker district), Khairagarh and Dongargarh (Rajnandgaon district) for the first phase of polls on November 12.