Congress Asks Why Is BJP Invited To Form Government In Goa 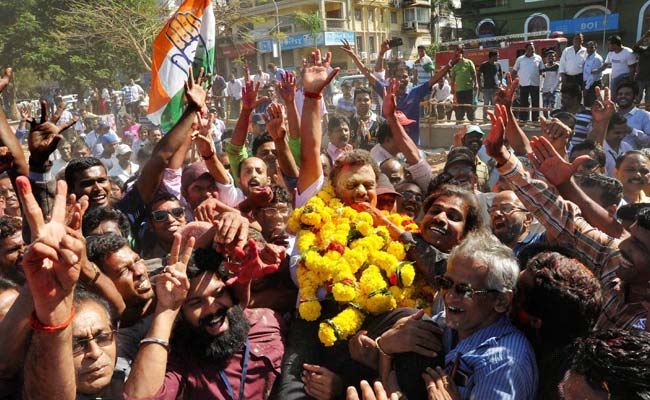 Congress candidate Nilkanth Halarnkar along with supporters celebrates his win in the Goa elections.

New Delhi: The Congress has objected to the BJP being invited to take charge of Goa. In a letter to the Governor, the Congress said despite emerging as the single-largest party after assembly elections results were declared on Saturday, the governor had invited the BJP to form the government - a move "not constitutionally permissible". Preempting a similar announcement in Manipur, it has also sent a letter claiming first right to form the government.

"As per well-established constitutional convention and propriety, the single largest party is invited to form the government and prove its majority on the floor of the House. It has come to our notice that through media reports that BJP has been invited to form the Government and the oath is scheduled on 14th March 2017," Congress said in a letter to Goa Governor Mridula Sinha. The party has also sent a similar letter to the Manipur Governor Najma Heptulla, sources said.

Ms Sinha had invited the BJP to form the government after it staked claim, saying it had the support of eight additional legislators required over its 13 to form a majority in the 40-member assembly. Three legislators each of the Maharashtrawadi Gomantak Party or MGP and Goa Forward party and two independents have lent support to the party. The Congress and its allies had won 18 seats.

The letter from the Governor's office said that Defence Minister Manohar Parrikar, who maintained till late Sunday evening that he had not resigned, has been appointed Goa Chief Minister - one of the key conditions of the allies and an unanimous demand of the BJP's own legislators. He will have to prove his majority in the assembly within 15 days of taking charge.

But the Congress says that Goa Chief Minister Laxmikant Parsekar lost both the constituencies he fought was a sign of the people's firm rejection of the BJP.

Promoted
Listen to the latest songs, only on JioSaavn.com
"Our political opponents (BJP) despite losing the mandate of the people have tried to misrepresent to your good-self that they enjoy the majority support of legislators. This is not only opportunism of the lowest kind but is also not constitutionally permissible," it said.

The party claimed it too had the required numbers to form government and were in "a position to prove the same on the floor of the House".