The building, constructed in 1973, was declared a dilapidated 'C1' category structure in 2016 by the BMC which meant it was unfit to live in. 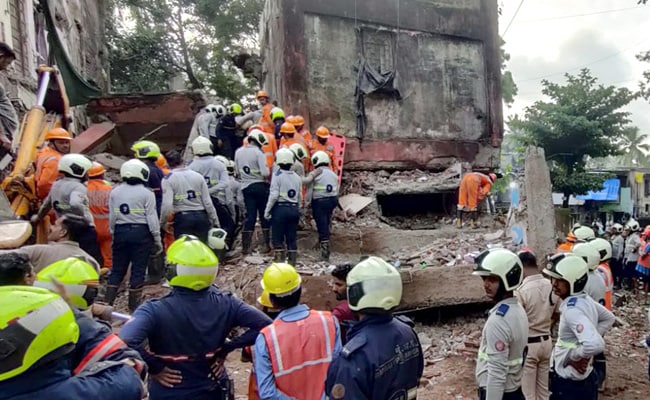 In 2014 and 2015, notices were issued for demolition of buildings in the housing society, BMC said.

The building in suburban Kurla which collapsed around midnight and claimed at least 18 lives had been declared as dilapidated once, but later it was removed from the category following a favourable structural audit report, a senior BMC official said on Tuesday.

The Brihanmumbai Municipal Corporation will carry out a probe into how the building's classification changed, and who carried out the structural audit, said municipal commissioner Iqbal Singh Chahal.

Mr Chahal was speaking to reporters after visiting the building, part of the Naik Nagar society, during the day.

The building, constructed in 1973, was declared a dilapidated 'C1' category structure in 2016 which meant it was unfit to live in.

According to a BMC release, it had issued the first notice to the housing society on June 28, 2013, asking it to carry out major repair works.

The civic body then initiated legal action as the society did not carry out repairs, and included it in the C1 category. A fresh notice under the Mumbai Municipal Corporation Act was issued.

In November 2014 and May 2015, notices were issued for demolition of the buildings in the Naik Nagar Co-Op Housing Society, the BMC said.

In May 2016, water and power connection were cut.

But the building was included in the C2B category on June 30, 2016, on the basis of structural audit report received from Sachdeva and Associates, an authorized audit firm.

A C2-B classification means a building need not be demolished and it can be repaired.

"We took an undertaking from them (residents) that they would do necessary repairs. Since the building was in C2-B category, it went out of our radar," commissioner Mr Chahal said.

Earlier, Ashwini Bhide, additional municipal commissioner, had told PTI that the BMC had been issuing notices to the building repeatedly under the Mumbai Municipal Corporation Act since 2013, initially asking for repairs and then for vacating it and demolition.

"Even prosecution for non-compliance was initiated. Later the residents got structural audit redone, and got it categorised as repairable, but didn't carry out actual repairs," Bhide said.

The residents stayed put despite constant efforts by the BMC to get the building vacated, she added.

They had even given an undertaking that they would reside there at their own risk, she said.

Naik Nagar Co-operative Housing Society is a cluster of four buildings. The 'D' building which collapsed around Monday midnight was located on the north end.