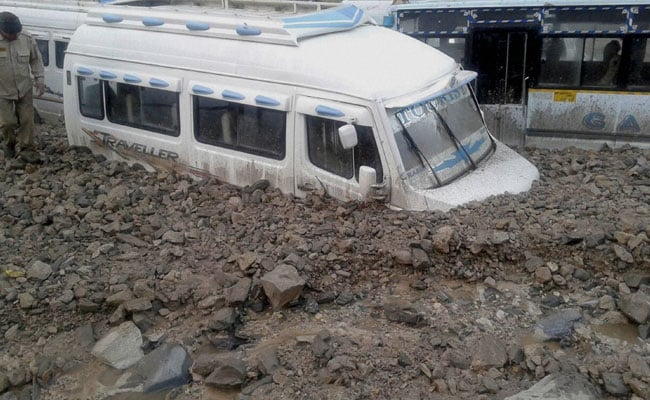 A vehicle stuck in the slush and mud after cloudbursts at Baltal near the base camp of Amarnath Yatra on Saturday. (PTI Photo)

Srinagar: The army on Saturday launched a massive relief and rescue operation at the Baltal base camp of the Amarnath Yatra where at least three people were killed and seven went missing following a cloudburst overnight.

Army officials said efforts were on to reopen the yatra route by sunset on Saturday.

"The army has launched a massive relief and rescue operation to save the pilgrims trapped in landslide at Baltal," defence ministry spokesman Lt Col NN Joshi said in Srinagar.

"There were cloudburst-triggered landslides at three places between Baltal gate and Rangamor," Lt Col Joshi said.

Soldiers from the 19 Garhwal Regiment have begun a search of the area.. A Quick Reaction Team (QRT) of the 24 Rashtriya Rifles has also reached Sonamarg along with rescue parties from the nearby Gagangir camp.

An army officer said 17 tents and many vehicles are buried under the slush.

Bulldozers were deployed by the army to clear the roads, along with manual effort.

Work has started to clear the landslide-hit area and open the road where it got blocked near a fish pond.

Nine people were injured, 780 shifted to an army camp, 1,500 pilgrims taken to Bhandvas while 12 shops have been washed away, the defence spokesperson said.

Of the injured, one critically wounded person was airlifted to Srinagar for specialised treatment.

Police said the two children who lost their lives were working in shops outside the base camp.