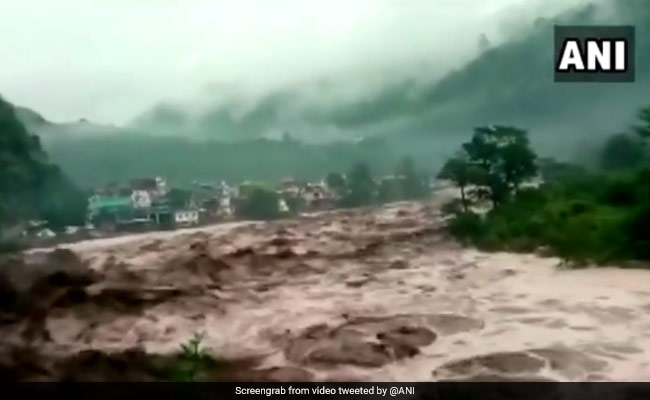 A cloudburst triggered floods in Uttarakhand's Uttarkashi district on Sunday.

Chief Minister Trivendra Singh Rawat has directed the Uttarkashi District Magistrate and Disaster Management Secretary to carry out rescue and evacuation operations and provide relief material to people impacted by the cloudburst.

The state government has dispatched teams of Indo-Tibetan Border Police (ITBP), National Disaster Response Force (NDRF) and State Disaster Response Fund (SDRF) for rescue operations. However, the teams are facing difficulties in reaching the spot due to heavy rain.

Gangotri highway has been shut down after debris fell from mountains on the road.

"We have received information about people being stranded and damage to a few houses in Makudi and Digoli due to heavy rainfall. Teams of SDRF, Red Cross, ITBP and NDRF have been moved for rescue and evacuation operations," Uttarkashi District Magistrate Ashish Chauhan told news agency ANI.

Digoli village head Shashi Nautiyal said two drains were overflowing and roads have been flooded. Dozens of houses have suffered damage besides apple trees getting uprooted, she added.

The Tons river in Uttarkashi is overflowing after heavy rainfall. The administration has gone on high alert, officials said.

The weather office has predicted widespread rainfall over the next three days in Uttarkashi.