Kishtwar Cloudburst: With the prediction of more rain till the end of this month, authorities in Kishtwar have asked people living along water bodies and slide-prone areas to remain vigilant. 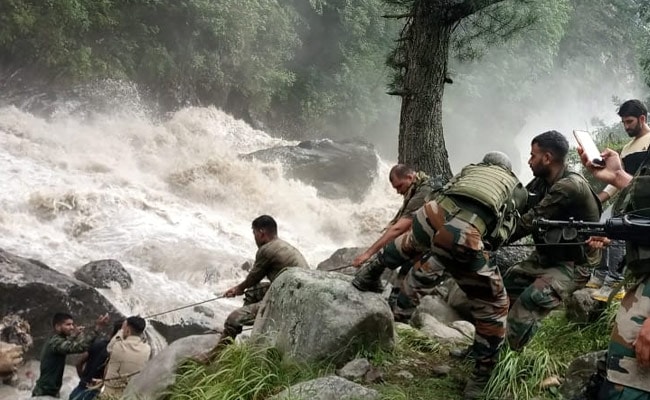 Cloudburst in Kishtwar: Rescue teams have been rushed to the site of the cloudburst.

Seven people have died and at least 20 are reported missing after a cloudburst in a remote village in Kishtwar district of Jammu and Kashmir early this morning, officials said. Several structures, including eight homes, were swept away by flash floods after heavy rain and cloudburst in the mountainous region of Chenab Valley.

Seventeen injured have been rescued. Rescue teams have been rushed to Honzar village of Dacchan tehsil, officials said. Two women are among the five dead.

when required.Keeping close track of the situation. Every kind of further help will be provided as per requirement. 2/2 #JammuAndKashmir

Bad weather is hampering the rescue operation, with several rescue teams waiting at airports, said VK Singh, a top official of Home Guard, Civil Defence and State Disaster Response Force. "The village is a three hour journey on foot from the last road connectivity," he said.

Most parts of the Jammu region have been receiving heavy rain for the past few days. With the prediction of more rain till the end of this month, authorities in Kishtwar have asked people living along water bodies and slide-prone areas to remain vigilant. The water level is Chenab river has risen due to the heavy rain.

"The meteorological department has predicted heavy rains during the upcoming days and water levels in rivers and nallas (streams) are expected to rise, which can pose a threat to the inhabitants residing near rivers, nallas, water bodies and slide-prone areas," the district administration said in an advisory issued late on Tuesday night.