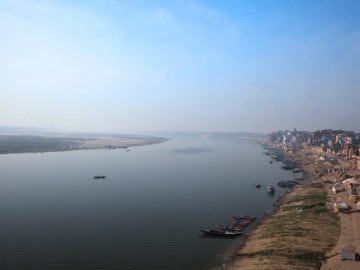 New Delhi: The Supreme Court today strongly rebuked the Centre for being unable to articulate to the court what its vision for cleaning the Ganga river is. The court said corruption was stalling the project and "heads must roll for this."

"You are unable to tell us your vision stage-wise on cleaning the holy river Ganga and your ultimate aim," the Supreme Court said, also asking why the post of Central Pollution Control Board or CPCB chairperson had been vacant for the past six months. The Centre has to explain that delay by October 27.

It suggested that the project needs "an expert with a vision" like E Sreedharan, the man who built India's metros, for the mammoth task. "This case is pending here in court for the last 29 years...nothing concrete has been done. We don't want to wait for another 29 years...we also understand it can't be done overnight...but you should have an expert who has a vision like Sreedharan," the court said.

The judges observed that if the discharge of industrial pollutants into the river was stopped, 30 per cent of the Ganga would be clean. But pollution boards in the states the Ganga flows through were not stopping this, they said, because of deep-rooted corruption.

"The pollution control board has to stop industries polluting the Ganga. Those supposed to prevent pollution are not doing their work and are being bribed. Heads must roll," the Supreme Court ordered. It directed the CPCB to explain what action it had taken against 215 industries situated along the Ganga, who have been charged with polluting the river.

Solicitor General Ranjit Kumar, who appeared for the Centre, accepted that corruption was a huge hurdle but said the government is committed to cleaning the river. The Centre also told the court that a consortium of seven IITs involved in the project will give a report by December and a roadmap will emerge.

The Solicitor General also informed the court that the government has issued notices to industries to implement zero pollution within three months and sought till December to report to the court on this.

Promoted
Listen to the latest songs, only on JioSaavn.com
The Supreme Court is hearing a public interest litigation on the cleaning of the Ganga in 1985.

This year, a Clean Ganga Mission was high on the BJP's election agenda. Prime Minister Narendra Modi, who is the Lok sabha member from Varanasi, based on the banks of the river, has pledged to clean the river and also set up a separate ministry headed by Uma Bharati. On a trip to the US earlier this month, he sought the help of NRIs in doing this.